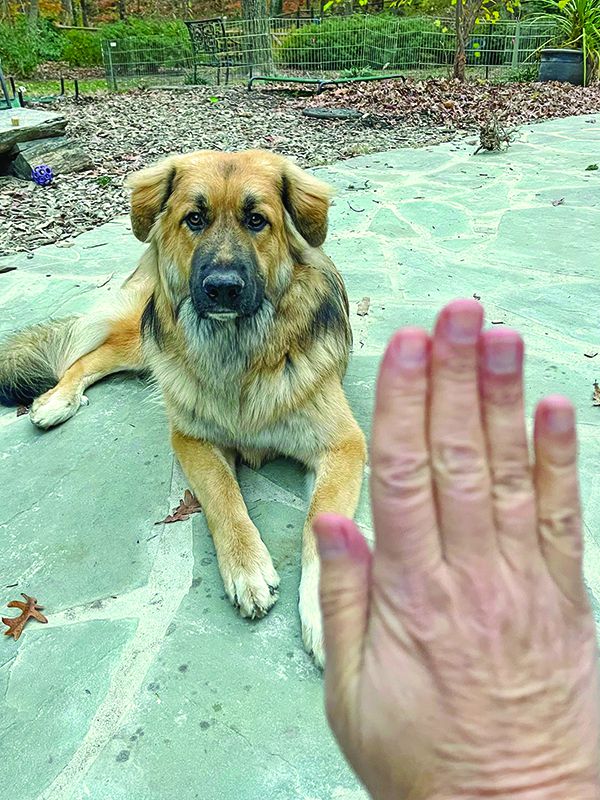 Anyone who’s tried to learn a foreign language knows the frustration of hearing the same word used in different ways. “Wait, I thought I knew what that meant, but now I’m not sure.” Sometimes, just as you think you know what to call something, you hear it called something else. “Ugh, nevermind. I thought I was getting this, but I give up.”

Alas, as we humans try to teach dogs our language, we often confuse them – slowing their learning – in just this way. Sometimes it’s because the various people in the dog’s life use different cues, and sometimes it’s because we haven’t thought through what a particular cue really means. Either way, it can result in a dog disengaging in the learning process because it feels like an unwinnable game.

Here’s a quiz: Which spouse is using the cue “down” correctly?

This, of course, is a trick question; they are both wrong, because they haven’t gotten onto the same page about their cues! As a result, their poor dog is set up for confusion.

If you want your dog to have a solid response to “down,” it can’t mean both “remove yourself from that higher level area” and “lie on the floor.” Pick one, and find another word for the other behavior. (The sofa-snoozing cue could be “off,” or the toddler request could be “lay.”)

USE THE EXACT SAME WORDS

The solution is to get everyone in your pup’s orbit using identical word cues. Many frustrated dogs have to try to learn from different family members alternating between the following words:

It doesn’t matter what you choose, it matters that you choose. Have a household meeting (or a meeting with your inconsistent self!) and decide once and for all what to call these behaviors. Then post that list on the fridge as a reminder.

The Problem with ‘No’

Often clients tell me they need help because their dog “just doesn’t understand the word no.” Their instinct is to become more punitive (Say it louder! Meaner! Stomp off!) to make the meaning of the word more clear.

What we need to do is give the dog a “Yes!” to do instead. The problem with “No” is that it is a blank space, a vacuum. It’s hard to teach something that doesn’t exist!

The way to move from a day of frustrating “no’s” to one of happy coexistence is to figure out the impulse that drove the behavior that’s bugging you, and teach an alternative “yes” behavior that you like. For example:

If your dog jumps up to greet people, teach her to sit instead. Use a leash to prevent the jump, then reward the heck out of a sit greeting – crouch down and give all that nice physical contact she wanted. She will learn that sitting is the more direct route to her #1 wish.

If your dog begs from the table at dinner, teach him to lie down on his nearby mat instead. Toss a treat over there. Then, every time he steps on that mat during a meal, toss another one in that spot. Once he’s hanging out on the mat a little more, wait until he sits to toss that treat. Progress to tossing treats whenever he’s lying on the mat. Voila! Two weeks later you have a dog who zooms to his mat to lie down the minute your dinner is served. You’ve taught an alternate behavior to begging – one that actually pays off for him.

If your dog digs holes in your yard despite your endless corrections, give her an approved digging spot – a far corner of the yard, perhaps, or a kiddie pool filled with sand. Bury some toys in there. The next time your dog starts to dig up your daffodils, instead of the ultimately useless “no,” just lead her over to the new digging spot and get her going. (Mind you, it may need to be in the shade, because one of the reasons dogs dig is to get to a layer of nice cool dirt.)

Sure, these solutions take some time and effort. That’s frustrating. But, have you ever wondered what it feels like to be a dog – born with very strong instincts to jump, dig, and chew – and to have everyone mad at you all the time for being who you are?

It’s only fair to help your dog get to a “yes.”

I ask my clients to send me one-minute videos of their training at home, mid-week after our lesson. There’s so much to think about – verbal cue, hand signal, body position, marker timing, treat delivery – that it’s easy to self-sabotage with one little mistake.

If that’s happening, then each day of slightly messed-up practice makes things worse. This week, I had to laugh because one of my favorite clients was asking her puppy to “touch” – while holding up the same hand signal she uses for “stay.” Talk about a puppy dilemma!

We could debate exactly which hand signals are best for different cues, but it comes down to personal choice. What matters most is that you think through what your hands are saying. Your pups are absolutely watching; body language is a more natural communication style for our dogs than our verbal cues, so it pays to be utterly clear and intentional with those motions. And have the whole household rehearse those signals together.

STAY VS. WAIT VS. PLACE

Think you know exactly what “sit” means? It’s not as simple as it sounds. Some people teach that a sit is simply when the dog’s bum hits the ground. But others teach that “sit” means to sit and retain that position until released with an “Okay” (or whatever your chosen release word is). My definitions don’t have to be the same as yours, but we both have to be consistent every single time we work with our own dogs.

That’s harder than it sounds. Perhaps the best example of the potential for confusing fuzziness comes with the family of cues that generally involve limiting movement: stay, wait, and place. Here are my own usages:

These three cues illustrate how there can be a lot of similar behaviors that are not actually the same. Are you using these terms interchangeably? Are you using just one of these cues but rewarding as if there are different definitions in different circumstances? If so, I’d suggest that this is why your pup’s response is not yet rock solid!

It sounds nerdy, but truly: Take the time to write out your cues, and think through what they actually mean. Discuss the cues with the household. Then give your pup that nice clear direction, and reward accordingly. You may feel stunned – and a little guilty – when you see how smart your dog suddenly seems!