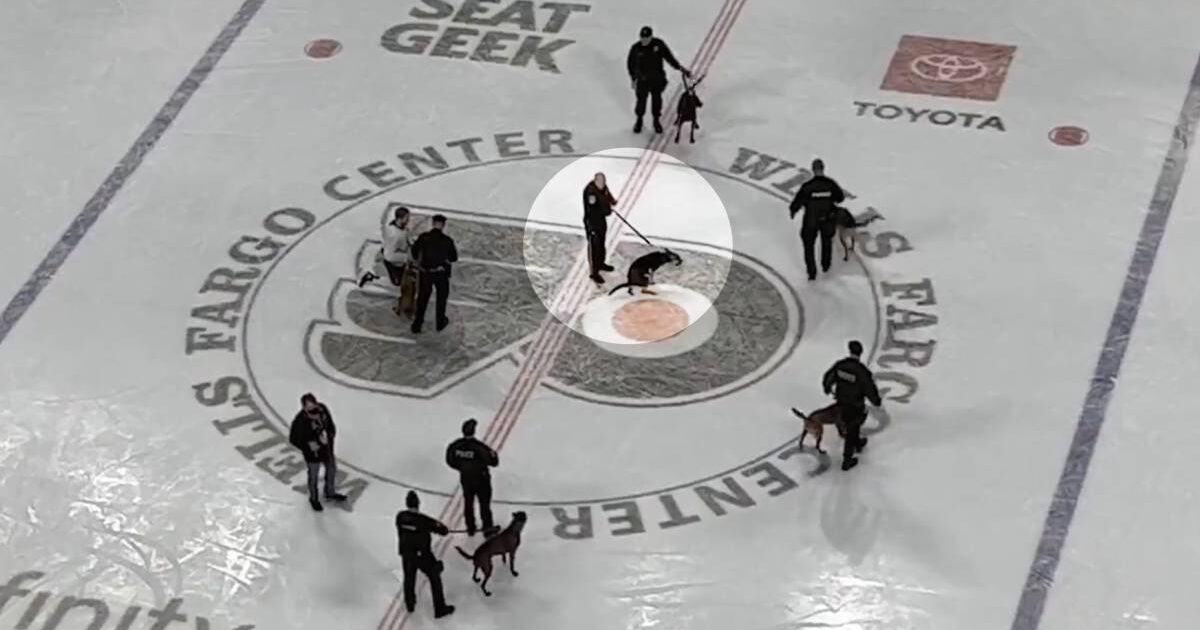 Sometimes even the most professional of working dogs can’t control their physical urges. Or, as the saying goes: When you gotta go, you gotta go.

Unfortunately (or fortunately, depending on how you view the Philadelphia Flyers), one police dog’s actions ended up being way too symbolic. The dog decided he had to do his business right as he crossed over the giant Flyers logo in the center of the ice at the Wells Fargo Center arena.

Jordan Hall, an NBC reporter and web producer, Tweeted a video of the incident on December 6, 2021. K-9s were at the game for a moment to salute their work, Hall said.

As opposing team, the Colorado Avalanche’s player J.T. Compher skated some laps prior to the game; the dogs started taking the ice. Hall explained:

“Compher greeted them afterward and one of the pups did his business right at the center of the logo. Stuff happens I guess.”

In the video, you can hear some amused groans and “oh nos” from the other officers, but mostly the dog’s handler just sort of lets the… stuff… happen. As many of us dog people know, once the poop starts, it’s hard to stop it.

Some Philly police pups were barking as the Avalanche’s J.T. Compher was rehab skating.

Compher greeted them afterward and one of the pups did his business right at the center of the logo.

Some Twitter users laughed at how a story about hockey became a story about a pooping dog. It seems too symbolic that anyone would poop directly on the image representing the hockey team.

“PHILADELPHIA — Flyers fans aren’t the only ones upset. Even the K-9 unit is pissed.” – @Davegisaac via Twitter

“Crap on ice, and no we’re not talking about the flyers recent play.” – @DevonS93 via Twitter

“Somehow still not the sh*ttiest thing that’s been on the ice this week.” – @D4NNYphantom via Twitter

Other committed Flyers fans saw this dump as tough love or even encouragement for the team, which has had 12 losses this year.

“If the season turns around now and we make the playoffs with the new coach, we’re gonna have to have a dog take a lucky poop on the logo every year from now on. Fans will throw lucky dog poo, etc etc. That’s just how hockey works.” -@JeffCohnPhoto

It’s probably just a dog that had to poop, but hey, I’m all about finding meaning in the mundane.