Your first weeks and months with a new puppy are wonderful: you get to watch your sweet, squirmy friend learn the ropes and meet the world! But there’s no denying it’s a wild ride to dog adulthood, especially for new pet parents unfamiliar with all the ways a pup can get into trouble.

That’s why the team here at Rover has put together our own wildest stories of puppy mischief. We hope our lessons learned make some good tips for first-time dog owners—or at least let all the new pet parents out there know you’re not alone!

Tip #1: Have some surefire ways to take things down a notch 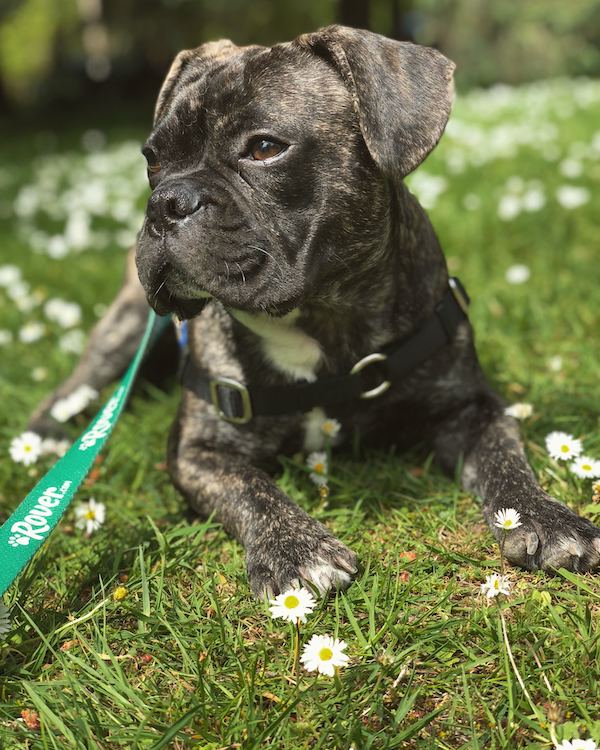 “Enzo loves to play, especially while in the office with his friends, by running back and forth. He is also built like a bowling bowl, very compact and dense. Twice, he has slammed so hard into the walls that he has broken them, leaving gaping holes. Lessons to be learned: make sure to take the time to calm your dog down if they’re getting overly excited, and know your dog’s play style.”

Product tip for first-time dog owners: Distraction toys are some of the handiest tools we know for channeling your dog’s energy in a different direction. Our favorites? Lick mats, Kongs, and challenging treat dispensers. Pull one out when things are getting a little intense to redirect your pup’s attention.

Tip #2: Always be prepared for a number two 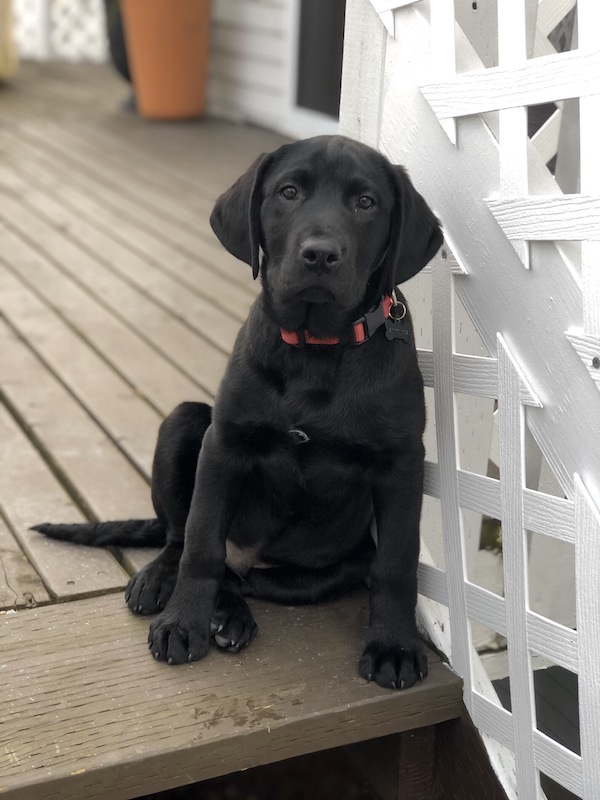 The handsome pooper himself: Tucker.

“Tucker refused to poop on walks for so long we stopped taking poop bags with us. He was about a year old the first time he pooped on a walk, and it was in the middle of a busy intersection. People were yelling at us as I started sprinting to the house, which was fortunately only a few blocks away, to get a poop bag. Moral of the story, ALWAYS take a bag.”

Product tip for first-time dog owners: While you’re getting new routines down, a poop-bag holder attached to your leash is a handy tool. It’ll make sure you’re covered any time you stroll with your pup . . . though no product we know can save you from forgetting to refill it. (If you find a way, please let us know.)

Tip #3: Learn your pup’s quirks and use them to your advantage 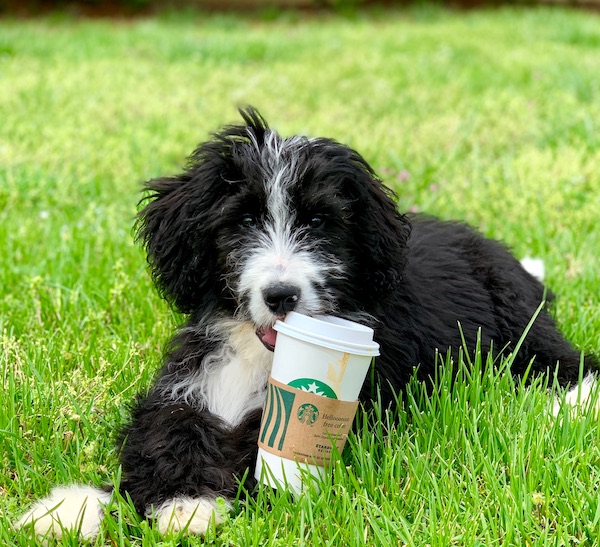 Sabine knows nothing is tastier than a human’s property.

“Our dog Sabine has always had a knack for getting into trouble, especially during her puppy days. Like many puppies, she tasted life: pinecones, toads, mulch . . . you name it. However, it quickly became apparent that her favorite entrees were the things she saw us using every day. Delicacies! And though we gave an earnest effort to puppy-proofing, Sabine proved to be quite clever in getting her paws on her humans’ things.

After multiple stolen coffee cups, an unfortunate incident with reading glasses, and a surprise successful passing of full-length pantyhose, we realized we needed to up our game. Our solution? We created some puppy-safe ‘contraband’ by playing with dog-safe toys and treating them like our own things. Coffee with a side of rawhide? Why not!

Soon enough, Sabine swept these toys into her collection of illegal human things, which made her feel naughty enough to be satisfied and helped us all to get through her puppyhood safely.”

Product tip for first-time dog owners: Knowing what makes your pup’s tail wag and heart sing (like human contraband) makes training a lot easier—which is one reason we like puzzle toys. They entertain your pup, and they also tell you a lot about how your dog’s brain works, what they like, and what they’re capable of.

Tip #4: Your pup isn’t going to learn his lesson—but you can 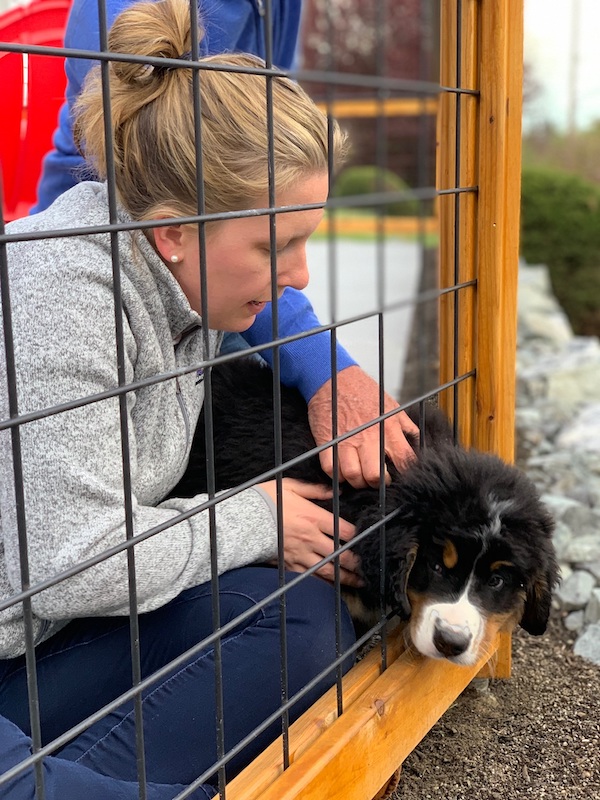 Dennis takes no responsibility for this.

“We have a hog-wire fence, and about a week after we got Dennis, he got so excited when a dog walked past our house that he stuck his head through one of the holes in the fence. He then wasn’t able to pull it back out. He got really scared and started yelping. So I sat with Dennis, and my husband had to rush to the hardware store (twice) to get the proper tool to cut the wire around his head so he could get out safely.

In full transparency, this happened twice. After the second time, we lined the fence with chicken wire until Dennis got big enough to no longer be able to squeeze his head through the squares. Fortunately, he wasn’t injured, and the second time this happened (pictured), he just sat there calmly until we cut a second hole in our fence to free him.

So if you have a fence or other space that a puppy can stick his head through, temporarily cover that surface with something to block the puppy from doing so.”

Product tip for first-time dog owners: Chickenwire is one neat solution, and dog fences, puppy playpens, and gates for pups are others. We’ve learned the hard way that temporary enclosures are your friend.

“When Iorek was little, his favorite cure for an upset stomach was to sneak into the backyard and munch on the grass. But one winter, there was no grass to be had—so while everyone was elsewhere, he slipped into the living room and found the next best thing: the Christmas tree. He pulled the whole thing over and made some serious inroads on the branches before anyone was the wiser.

We called the vet, but in the end, there wasn’t much to be done but wait for him to get all the tree out. For about 48 hours, he went around sporadically puking up pine needles. On the plus side, it was the best his vomit ever smelled—very piney. On the minus side, it was a lot of vomit.

The moral of the story is just because your dog doesn’t show initial interest in something doesn’t mean he won’t under special circumstances. Puppy-proof your Christmas tree—and anything else that might be hazardous, even if you don’t think your innocent-looking pup would try to take a bite out of it.”

Product tip for first-time dog owners: It can be hard for even experienced pet parents to know what constitutes an emergency (like eating pine needles). Round-the-clock pet telehealth services like Pawp can come in handy when you’re trying to make tough decisions—or just have basic questions about what’s normal for a pup. We’ve tried Pawp ourselves! 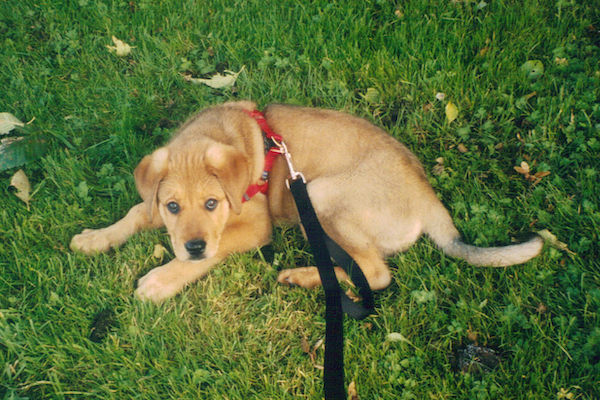 Steal bacon grease? Marley has no idea what you’re talking about.

“Once, when our beloved Rottweiler/Mastiff was a puppy, he swiped a very large amount of bacon grease from the counter and ate the whole thing. He got so sick he was eventually throwing up and having uncontrollable, oily diarrhea in the middle of the living room on the wall-to-wall carpet.

We took him to the vet, where they flushed his system, administered some kind of charcoal and IV fluids, and kept him overnight to monitor his organs.

Thank goodness he recovered! But our carpet is another story—the many stains were impossible to get out, and not only did they soak the carpet, they went right through the carpet pad to the wood floor beneath, forever staining (and warping) it! We not only had to rip out the carpet, we had to refinish the floors.

Now, when we need to keep toxic or dangerous ingredients away from our pets, we get really creative where we put them (on top of the fridge, in the fridge, on the highest shelf in the pantry, behind closed cabinet doors) so that we know for certain they can’t reach them.

Lesson learned: No barrier, even three-foot-high countertops, is a match for a persistent dog’s nose for food!”

Product tip for first-time dog owners: For messes on Marley’s scale, nothing but professional help will do. For most other situations, though, you’d be surprised what today’s enzyme cleaners can get out of your carpets and furniture. It pays to have a supply of cleaning tools on hand! 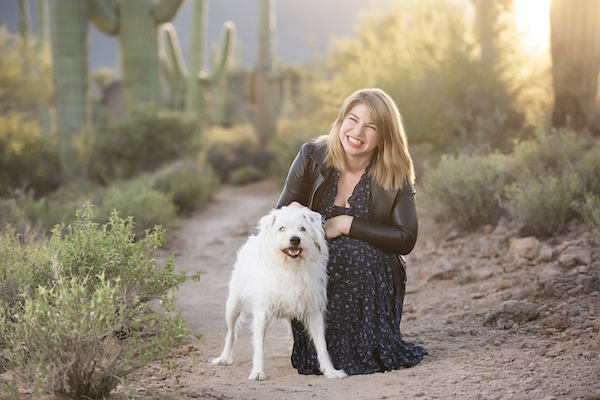 “If you walked down a particular street in Galveston, Texas, twelve years ago, you might have met a young dog sitting in the middle of the sidewalk, a long cable tethering her to the yard behind her.

Miss Bennet was just 18 pounds when I got her, the smallest dog I’d ever had and the cleverest as well. She quickly discovered that she could wiggle her narrow shoulders through and out of the wrought-iron fence bordering the front yard of our historic house. I tried blocking the fence’s openings with chicken wire, but she learned to climb it, so I rigged up the cable.

The theoretical perfect length extended from the top of our high porch to the yard . . . but then it would also reach the top of the fence. So I extended the line to the middle of the sidewalk, giving her leeway so she wouldn’t be caught short when she inevitably tried to climb the fence anyway. It worked—she stayed safe, much to the amusement of passersby.”

Product tip for first-time dog owners: Pups can be fiendishly clever when it comes to thwarting your safety systems. Prepare for their antics with contingency plans, like safe cables and GPS collars.