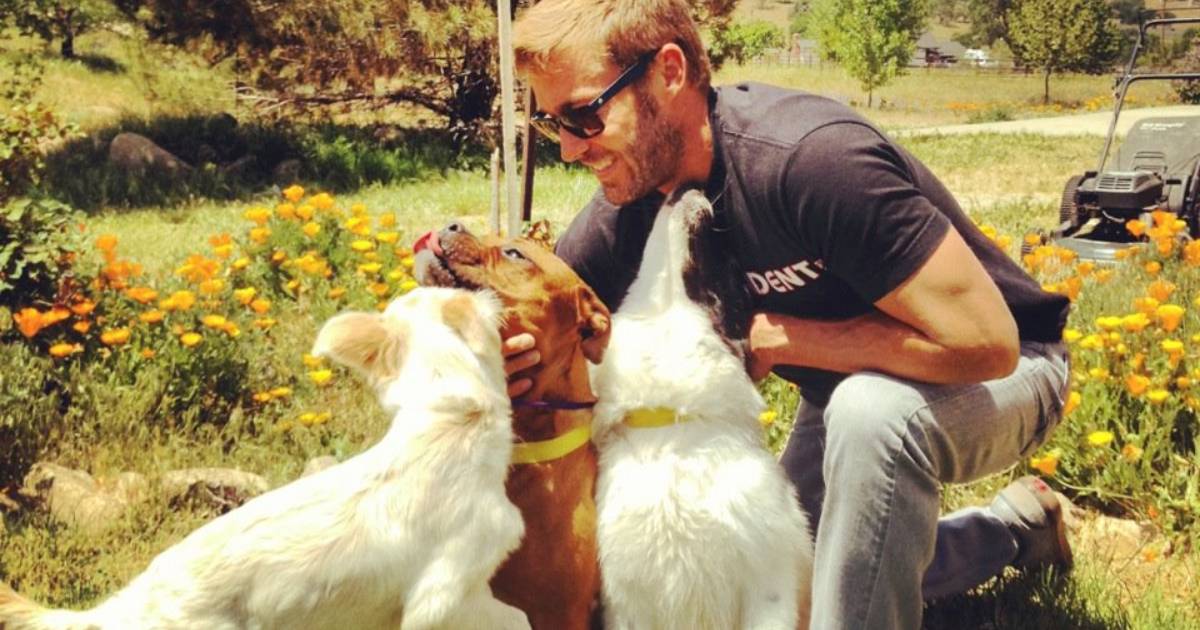 Zach Skow, founder of Marley’s Mutts Dog Rescue, helps dogs and people every day. For most of his early adult life, though, he couldn’t even help himself. The 41-year old suffered from addiction for over a decade.

Skow appeared on The Ellen DeGeneres Show, sharing the heart-wrenching story of how his dogs helped him overcome addiction and related illness. The story began when Skow was just a teenager.

Skow’s story of struggling with addiction highlights the value of family support and canine companionship. He started at the beginning:

“For as long as I can remember I could not live in my own skin… alcohol and drugs were the only things that made me feel like I could be alive in me. By the time I was 17, I was an every day drinker, I got kicked out of college, started using heavy drugs, started selling heavy drugs, and just disappeared into a bottomless pit of negativity and self-hatred with no way out.”

At just 28 years old, the physical toll of these addictions became evident. Doctors diagnosed Skow with end-stage liver disease and said he would die in 90 days without a liver transplant. He was eventually sent home to what he called “hospice” with his dad and dogs.

When Skow caught a glimpse of himself in the mirror one day, an epiphany occurred:

“I remember making contact with my eyes and not recognizing what I saw, not understanding who was looking back at me.”

Then he recognized his three dogs standing behind him, unaware of his self-doubt.

“I look back at them, all three of them, Marley, Tug, and Buddy are looking up at me like I am just Matthew McConaughey mixed with Barack Obama… ‘Dad we see you.’ and I hadn’t seen myself in forever… that day I decided if I couldn’t live for myself I was going to try and live for them.”

After finding this new motivation, Skow and his dogs started taking regular walks, which was difficult for him at the time. Eventually, those walks became mountain hikes and jogs, and he always did it with a pack. The pack grew as he added foster dogs to the group walks.

“By the time I had 6 months of sobriety, I no longer needed a liver transplant and Marley’s Mutts was born.”

Marley, the dog that inspired the organization’s name, was a Rottweiler/Pit Bull Skow rescued from the Mojave Shelter in 2002. Marley died in 2016 at age 15 after a battle with cancer. The Marley’s Mutts website calls both Marley’s Mutts and the Mutt Militia “his legacy.”

“When Zach was diagnosed with end-stage liver disease, it was Marley who helped pull him from despair and into the fight. It was his relentless love, omnipresent affection, and “today can be the best day of our life” mentality which helped Zach live again.”

Today, Marley’s Mutts is “a recognized and decorated 501C3 nonprofit organization” in California, working hard “rehabilitating souls and creating second chances using the power of the human/animal bond.” They give unwanted or abandoned animals a second chance through fostering and adoptions. They also run therapy dog training programs.

During his appearance on Ellen, Skow also had the chance to describe the Pawsitive Change Program he runs through Marley’s Mutts. Difficult to adopt dogs are sent to prisons for 14 weeks of training, where they work with inmates to become certified therapy dogs. The inmates also receive vocational certificates through the program.

“Our program isn’t just for the dogs and our students—it’s for us. Make no mistake about it, America’s prisons are filled with some of the most understanding, empathetic people you can imagine. Do you know why? Because they have been through it!”

Skow believes the program “should be in every prison in the United States.” He understands the toll life can have on anyone, and he also knows that having a dog (or several) nearby can really help.

As one post on the Pawsitive Change Program page states:

“Every rescued dog is a furry piece of medicine that could be out there saving someone’s life!”

At the end of The Ellen Show taping, TisBest, a show sponsor, and Ellen donated $20,000 to help Skow continue his mission of paying it forward.