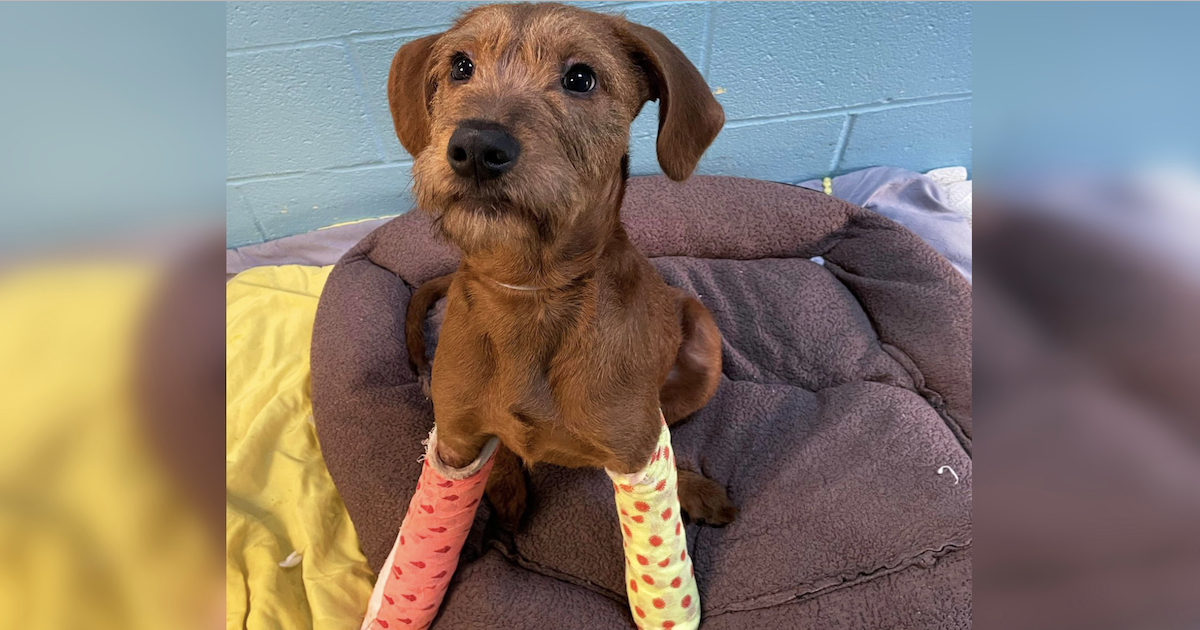 The Kentucky Humane Society (KHS) can never say no to helping a dog with a tragic story. They’re the well-known organization that saved Ethan, the severely malnourished dog. Now, they’re taking on a new challenge, and they need all the help they can get.

The humane society found a traumatized puppy named MacGregor. Somehow, both of the 5-month-old pup’s front paws were broken in unusual ways. Surgery for those injuries will cost more than KHS’ budget for outside medical care, but they are doing it anyway. They can’t bear to see sweet little MacGregor suffer any longer.

KHS took MacGregor out of an overcrowded shelter despite his expensive medical needs. No one knows for sure where he came from or what happened to him, but it’s clear that his little paws were in pain. So, the shelter prepared him for crucial surgery.

“This poor boy suffered blunt force trauma to his front paws that resulted in broken metacarpal bones in both his right and his left paws. These are very unusual injuries and we do not know what may have caused them, but we are determined to help him,” KHS wrote on Facebook.

A vet specialist confirmed that MacGregor needed surgery on both his front legs. The surgery would repair his broken bones and allow him to walk again. However, the procedure had a minimum quote of $5,000, which is more than KHS has to spend on outside veterinary procedures. Yet, they know he’s worth it.

Despite everything, the shelter says MacGregor is super loving and affectionate. He quickly fell in love with the staff members, so he’ll make a great addition to any family once he fully recovers.

“This handsome boy has quickly stolen all of our hearts at KHS! Despite the pain he is in, he has the best personality and loves giving kisses to all of the staff and volunteers who visit with him,” wrote KHS.

After KHS shared photos of the puppy on Facebook, many people have donated, giving the shelter more than enough needed for the surgery. Like most animal shelters, KHS relies heavily on donations, which allow them to save many dogs like MacGregor. If you’d like to help out, consider donating to KHS!

MacGregor will have a long road to recovery ahead of him, but he’s excited for what the future holds. He now wears two brightly colored casts to reflect his bright, loving personality. Every penny spent on his care has been worth it!

Google’s Top 10 Most-Searched Dog Breeds In The U.S.
Hero Dog Sniffs Out Injured Baby Girl Abandoned In Family’s Shed
Abused Dog Set To Be Put Down Tries To Bite The Hand That Wanted To Save Her
Virtual Vet Appointments: The What, Why, And How
33 Food Recommendations for Boxers with Sensitive Stomachs