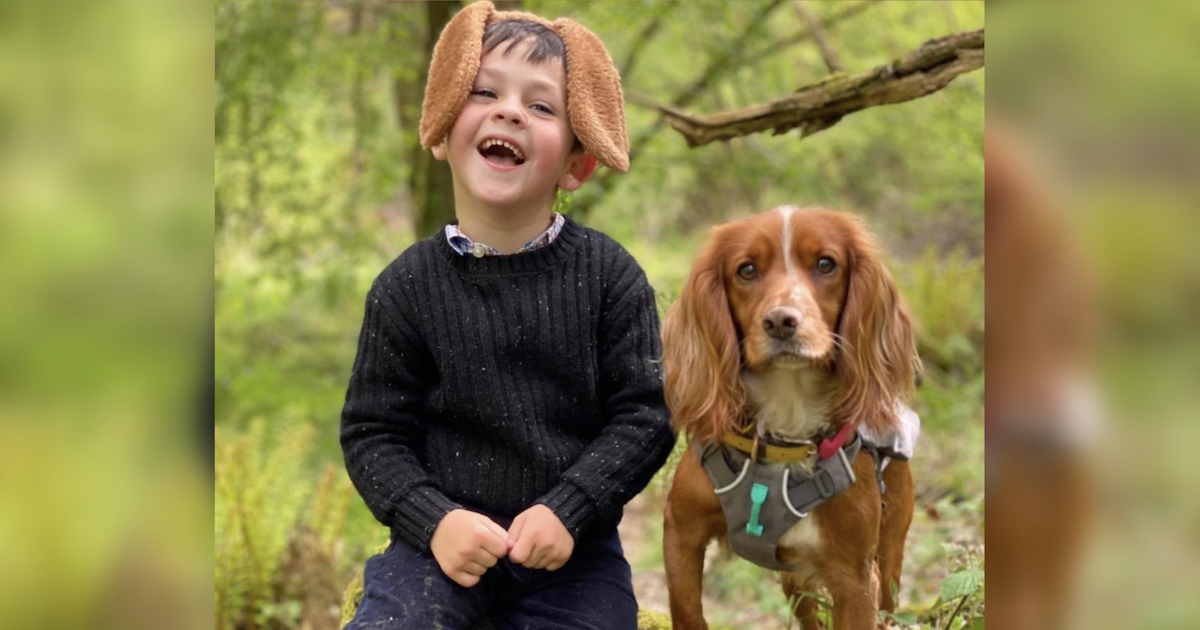 Five-year-old Leon has autism and a rare brain condition called Chiari malformation. His brain condition causes the lower part of his brain to push toward his spinal canal, causing throbbing headaches. He also has to be fed through a gastrostomy tube in his tummy.

At a young age, Leon, who prefers to be called “Mancub” after Mowgli’s nickname in The Jungle Book, didn’t speak at all. He always kept to himself and avoided interactions with people. But when his parents brought home a Cocker Spaniel puppy named Fern, everything changed. Mancub opened up to Fern and soon became more confident and joyful.

“His real name is Leon but Mancub is his nickname from when he was a baby – he looked like Mowgli AKA Mancub from The Jungle Book,” said Hayley, Mancub’s mom. “He will tell anyone that calls him Leon that his name is Mancub and he gets quite annoyed with anyone who chooses to argue with him over it.”

Mancub’s parents run a falconry business, so they wanted to get a dog who could help out with that. But they fell in love with Fern’s sweet, cuddly personality and decided she would make a great family dog. When they introduced her to Mancub, their hearts melted.

“At that time Mancub was stuck deep in the depths of autism – no eye contact, no words, no interaction. He was sadly locked in his own little world until he met Fern. It was love at first sight, his eyes lit up and the pair became inseparable,” said Hayley. “At first Mancub started interacting not with humans but with Fern and he had a sparkle in his eyes we hadn’t seen before.”

Hayley was so happy to see her son finally smiling and coming out of his shell. So, she found a wonderful dog trainer to help teach Fern how to assist Mancub. Even before her training, she already had some nurturing behaviors toward him. Mancub tends to “headbutt” when his headaches, so Fern naturally figured out how to stop him from hurting himself.

Then, when Fern got professional training, she learned how to help out the family in other ways too. She brings Mancub’s clothes and feeding supplies to him, loads the washing machine, and even helps her human get dressed. It’s amazing how quickly she picked up these complicated skills.

Together Anything is Pawsible

Now, after several years together, the boy and his dog are inseparable. Mancub even regularly wears dog ears and a collar to match his best friend. They’re so close that Fern was heartbroken when Mancub had to stay at the hospital for a while without her.

“She sat by the front door, and she just kept bringing me his shoes and coat. She just didn’t understand why he wasn’t there,” said Hayley.

Thanks to Fern’s love and loyalty, Mancub is the happy, talkative boy he is today. Hayley and her husband set up social media pages called “Together Anything is Pawsible” to help showcase the beautiful bond that the two have.

Hayley also set up a charity called T.A.P. Assistance Dogs, which pairs autistic kids with dogs who can help them. Dogs bring out the best in us, so it’s heartwarming to see kids grow up with a lovable, furry friend by their side. Mancub would never have had so much success if it hadn’t been for one special canine.