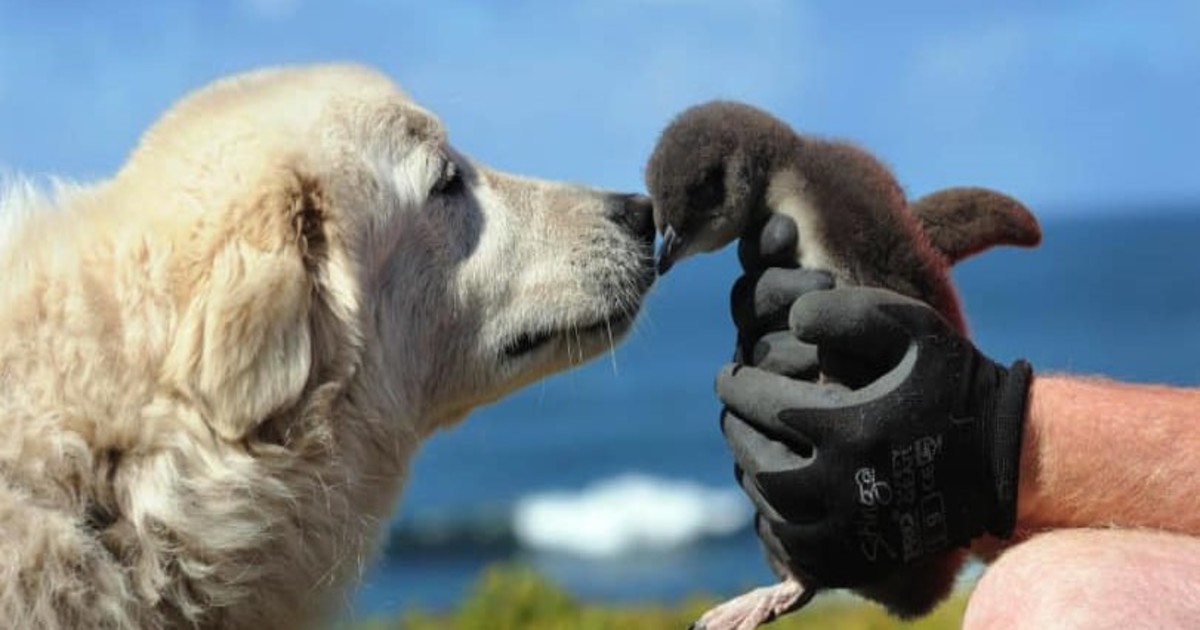 Since 2006, Maremma dogs have been protecting the vulnerable penguins on Warrnambool’s Middle Island in Victoria, Australia. The specially skilled dogs prevent foxes from decimating the penguin population.

The incredible work these dogs do was even the subject of a 2015 film ‘Oddball.’ After eight seasons on the island defending the birds, the penguin program’s “matriarch” Tula, who largely inspired the movie, sadly passed away at age 13 at the end of October, 2021.

“Tula was the lead guardian — she was always the first to jump up and bark if there was a threat. Middle Island was her domain. She had such a strong instinct and loved protecting her island.”

Before her passing, Tula had two cruciate ligament surgeries and arthritis. Though her loss is devastating, handlers acknowledge that it was simply her time. She went peacefully, surrounded by love.

“Tula spent her last night with loved ones visiting her and went to sleep with love and a stomach full of her favorite food.”

“It’s the end of an era for one of the world’s most innovative conservation projects. The legacy that Tula and her sister Eudy have created will live on in the work undertaken by the next generation of maremma guardian dogs and the dedicated people who make the project possible.”

A Tribute To Two Heroic Dogs

The dogs’ ashes will be scattered at Middle Island during a public memorial on November 5th, 2021. You can watch the ceremony online on the Facebook page for the Middle Island Maremma Penguin Project.

The Middle Island Maremma Penguin Project page also bid a touching farewell to Tula and Eudy, noting the important project will continue in their absence:

“Tula and her sister Eudy are together once more. They have been the heart and soul of the project. The sisters have trained the next generation of guardians who have taken over protecting the island.”

Dogs have been working important jobs since their relationship with humans first began. Their unique abilities paired with their willingness to learn and desire to please enable them to perform a wide variety of tasks, from health care to law enforcement and conservation. Maremmas, for example, a breed of Australian herding dogs, use their special skills to protect a species of penguins from extinction.

These amazing dogs, known as “The Middle Island Maremmas,” were specifically enlisted by the local government to protect the dwindling Little Penguin population. In a world-first, the dogs were trained and placed on the island during breeding season to look after the birds.

A Brief History Of The Middle Island Maremma Project

The Middle Island Maremma Project began in 2006 after the colony of Little Penguins was decimated due to predation from foxes. A local chicken farmer by the delightful name of Swampy Marsh had been using these particular dogs to defend his free-range chickens. He suggested they might be able to help save the penguins, too. After all, penguins are basically just “chickens in tuxedos!”

Middle Island is just off the coast of the village of Warrnambool in south Victoria, Australia. In the evening when the tide is low, people and dogs can walk right across. Unfortunately, this means deadly predators like foxes also have easy access to the sleeping penguins. Before the Maremmas came along, the tiny birds were easily picked off as they snoozed in their dens. Now they can rest peacefully knowing their faithful guardians have their backs!

With the Maremmas’ protection, the penguin population on the island has increased steadily to an estimated 180 penguins during the 2016/2017 breeding season. Dogs may be man’s best friend, but they’re an endangered bird’s best friend too.

Middle Island has been closed to the public since 2006 for the birds’ sake, which may have helped the population. Still, the dogs’ value is very clear. In 2017, penguins returned earlier than usual to the island, so the guard dogs had not yet arrived. The foxes took advantage of the situation, killing 140 penguins. Once the Maremmas, Eudy and Tula, returned to the island, the killing stopped.

“It was a sad situation to have all these penguins killed, but it showed how important the Maremmas are for protecting this penguin colony.”

When they’re not working during penguin breeding season, the Maremma guardian dogs can be found at Flagstaff Hill Maritime Village. There, they interact with visitors and help educate people about environmental conservation. People can meet the dogs by joining one of the ‘Meet the Maremma Experience’ tours or visiting them at Warrnambool’s Flagstaff Hill Maritime Museum.

While the Maremmas are obviously very cute, they’re working dogs suited to a particular environment. Their official website also notes those wishing to adopt one should consider this:

“Like all purchases of dogs, you should research a dog that suits your lifestyle and location. Maremmas are generally not suited to suburban or small block locations. So while we hope you like our project, Maremmas aren’t for everyone.”