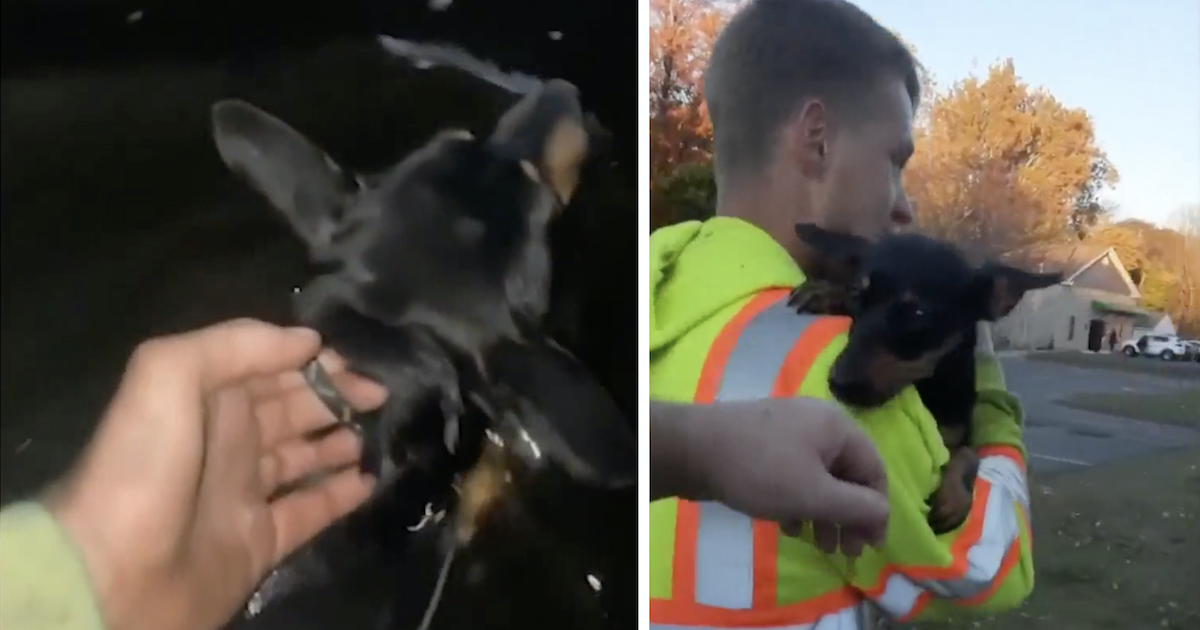 As Andrew Grosky and his dad Kevin Grosky drove down a Connecticut road, they witnessed a shocking event. They saw a small dog get hit by a car, then run off into the woods and toward a freezing river. Andrew didn’t think twice before jumping into action.

Several people rushed to see if the dog was okay, but Andrew was the one who took it a step further. He jumped into the chilly stream after the dog, ignoring his own discomfort. Andrew kept on swimming until the dog was safe and sound. As a lifelong animal lover, he knew he had to do the right thing, no matter how difficult it was.

Andrew said that as he entered the river after the dog, he didn’t even notice the cold temperature because he was so focused. The water came up to his belly button as he approached the struggling dog. The pup was so scared that he swam into a pipe, so Andrew swam in after him.

As Andrew swam further into the pipe, he found the dog clinging to part of it. The pup didn’t put up a fight as Andrew picked him up and brought him to land. Once on shore, both of them shivered, but they were okay.

“I unzippered my jacket a little bit, put it inside my jacket, and then I gave it a big hug and was breathing on it. He was shaking a lot. He was really cold,” said Andrew.

A Cold But Safe Canine

The dog seemed to be in good shape despite the car accident and frigid waters. So, Andrew and his dad asked around to find out where the dog came from. They found out who the dog’s family was, but they weren’t home at the time.

Andrew gave the trembling pup to the family’s neighbors to ensure that the dog could be warm while he waited for his humans. Andrew hasn’t gotten an update yet, but he hopes the dog is doing well. Kevin said he isn’t surprised that his son went to such lengths to save a dog in need. Their whole family loves animals, so it’s a part of who he is.

“We’re animal lovers. We always have been, and we always will be. I’m just very proud of him,” said Kevin.

Swimming in cold water isn’t fun, but sometimes you have to take risks to save lives. Andrew was just doing what he felt was right, but his actions made him a hero. Thanks to him, a freezing, terrified dog made his way back to a warm home!