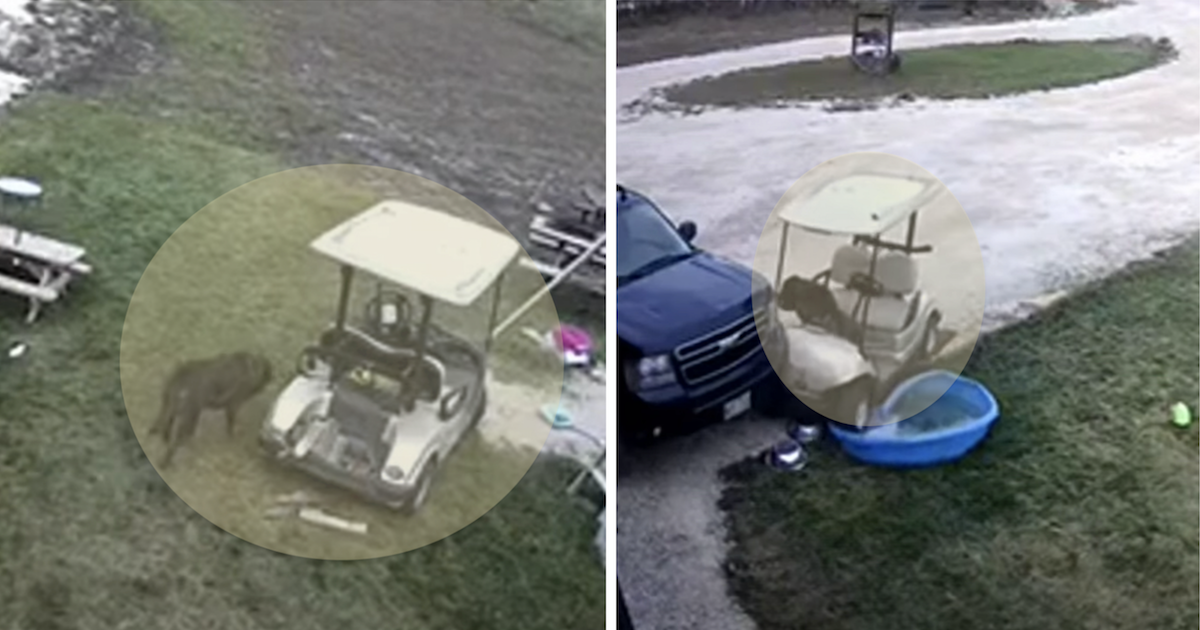 Lots of dogs have special talents, but does it count as a skill if it’s done by accident? A 10-year-old English Mastiff named Titan loves golf cart rides, but his humans aren’t always around to take him. So, one day, he decided to take matters into his own paws. While resting in the golf cart after a difficult day, he accidentally drove it. The golf cart ended up smashing into his human’s car, so he fled the scene to avoid punishment.

Yet, when his family found out, they were more shocked and amused than mad. Titan is usually a troublemaker, but this took it to a whole new level!

Going for a Joy Ride

When Mallory Kmet returned to her home in Winnipeg, Canada, she saw that her family’s golf cart had crashed into her truck. At first, the family thought someone had entered their property to do it, but when they looked at the security cameras, they realized that was far from the truth.

As it turned out, Titan was the one who went for a joy ride. He had to stay away from the house because he had been playing with a skunk. So, when it got a little rainy outside, he ran to the golf cart. He often hops on the golf cart for rides, but he always has to wait for a human to join him. However, this time, it started moving on its own.

Kmet’s husband had forgotten to turn off the golf cart last time he used it. So, when Titan accidentally leaned on the gas pedal, the small vehicle took off. The wheels were turned, so the golf cart made a U-turn toward his mom’s truck.

“He got on it but he’s too big. So he’s moving around and he sat on the gas pedal and it took off and hit my truck,” Kmet said. “The golf cart was pushed into the truck pretty good so he hit it pretty good.”

After Titan hit the truck with the golf cart, he casually hopped off the vehicle. He hung around for a few moments but then wandered off, hoping no one would find out what he did. Unfortunately, the security camera quickly gave him away.

Luckily, Titan had no injuries after the event, and the truck only suffered minor damage. Kmet’s husband was able to repair the vehicle himself. From now on, the family promises to always keep the golf cart off when no one is around.

“He still wants to go for golf cart rides so you’ll still catch him sitting in the golf cart cause that’s one of his favorite things to do,” Kmet said.

Of course, as mischievous as Titan is, his family isn’t mad at him. He had no idea what was happening, and it ended up making a funny story. If he wants to drive the golf cart again, he’ll need to get a driver’s license first!