For my dog, a four-year-old Chiweenie, his allergy journey began with a recurring ear infection that came out of nowhere. He would scratch his ear so hard that he would cry, resulting in a trip to the veterinarian’s office. Prescription ear drops would clear up the infection, but after a few weeks, I would notice the same painful scratching once again, requiring another vet visit and yet more ear drops. I asked my vet what was causing my dog’s recurring ear issues, and he said an allergy might be to blame.

It was the beginning of a long process—one a surprising number of dog parents go through. Dr. Rebecca Greenstein, Chief Veterinarian at Kleinburg Veterinary Hospital and Rover Dog People panelist, estimates that as much as 20% of her caseload consists of itch cases. Many are the result of allergies to a food or environment.

The symptoms of a dog allergy typically include itchy or inflamed skin, hair loss, runny eyes, gastrointestinal issues like vomiting or diarrhea, or—in my case—ear infections.

And they’re notoriously difficult to pinpoint, as I discovered when I set out to investigate.

I already had a suspect. A few months before the infections started, I had switched my dog from the salmon-based, grain-free kibble he’d eaten all his life to a similar one that had grains. I changed out the grain in my dog’s diet, but after testing three different kibbles with no decrease in ear infections and itching, I realized that finding the allergen wasn’t going to be as easy as I’d hoped.

That, too, is a common theme in the allergy odyssey of pet parents everywhere: testing exhaustion. A proper test requires you to isolate just one variable at a time and exclude that from your dog’s diet and environment for six to eight weeks. Every failed test means almost two more months of itching and infections. 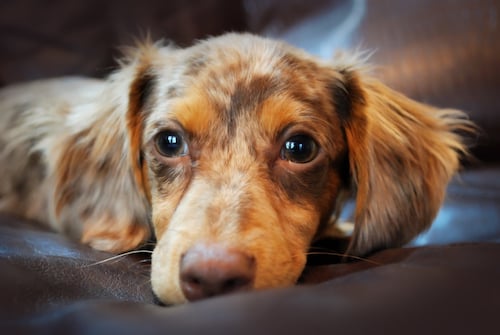 There are medical tests a pet can undergo to accelerate the process, but each comes with its own set of complications.

Intradermal testing is the original gold standard. It involves shaving a patch of your dog’s skin, then injecting small amounts of potential allergens and monitoring the results. It’s typically only performed by veterinary dermatologists. A pet has to be sedated to undergo it, and it’s very, very pricey.

Blood testing is easier. It’s something your own vet can perform, and while it hasn’t historically been as accurate as IDT, a growing body of evidence suggests that it can help your vet design an effective allergy shot profile—the goal in scenarios where removing an allergen isn’t realistic.

My vet’s office quoted me $900 for an in-office allergy blood test.

It was significantly more than I had hoped to spend, so I turned to the internet—and that’s when I found the 5Strands test.

The 5Strands test makes an impressive promise: their Pet Standard test can review your pet’s compatibility with 275 common commercial pet food ingredients and 105 environmental factors, including household cleaners, grasses and pollens, fabrics, and the dander of their fellow pets.

On the food front, it promises to flag fruit, vegetables, proteins, and grains, dividing them into three categories. Foods that fall into the Level 1 and 2 categories should be offered to your pet only occasionally, while Level 3 intolerances should be immediately eliminated from your pet’s diet for a testing period of six to eight weeks.

No blood or skin is needed—just 10–15 strands of your pet’s hair, which you submit via mail. After your sample arrives at the 5Strands testing facility, it’s processed within seven days, and the results are emailed to you.

The current price of a 5Strands test is $148—not even a fifth of the cost of a blood test. It sounded pretty great.

But before you rush out and buy one for your itchy pup, there are a few things to know.

First, when it comes to allergies, as Dr. Rebecca Greenstein points out, “We have no evidence at all that fur is a type of tissue worth testing.”

“It’s not that it’s impossible,” she clarifies. “But we have so much evidence that tells us what’s worth testing, and science doesn’t support testing fur.”

Then there’s the method itself. The 5Strands test uses bioresonance technology to scan the hair sample—a pseudoscientific technique based on the idea that certain electromagnetic patterns can indicate an “intolerance” to a food or object. It’s telling that the 5Strands test avoids the use of the word “allergy” on its packaging, opting instead to call itself an “intolerance” or “sensitivity” test. There’s also a disclaimer on the 5Strands site: “Our method of testing does not test for IgE or IgG mediated responses or true allergies.”

Still, I was curious. Considering it was a fraction of the price and less invasive than a blood or intradermal skin test, I decided to give it a shot, albeit with a healthy dose of skepticism.

How the 5Strands Test Works 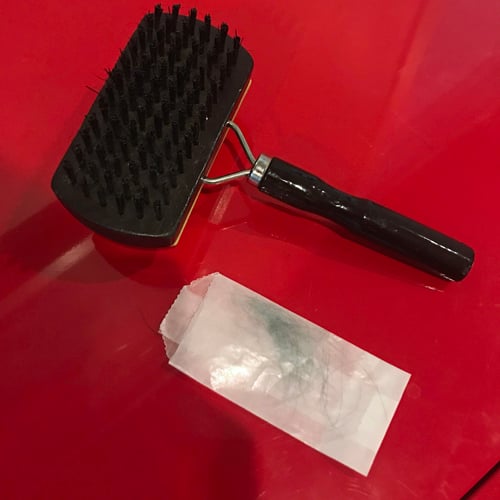 The 5Strands testing kit arrived with a little collection bag and a return envelope to send back my pet’s hair sample. Fortunately, because my dog sheds a lot, collecting the 10-15 strands of hair was as easy as brushing his coat. Once the test had processed, 5Strands emailed me the results: a 10-page PDF attachment.

It listed all the allergens that 5Strands tested the hair sample for and offered an explanation of how the company rated the level of intolerance. Red flagged severe Level 3 intolerances, while yellow indicated a moderate Level 2 intolerance. Green was a mild Level 1, and gray indicated an insignificant response that did not meet the testing threshold.

Here’s what one page of my dog’s allergy test looked like: 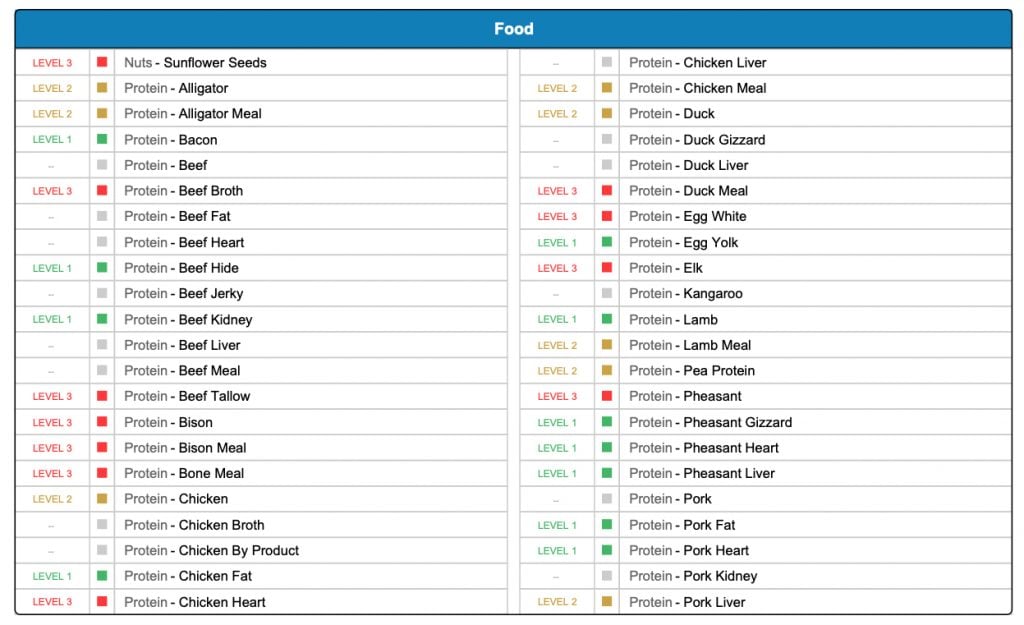 I was surprised by the volume of things my dog was intolerant to. Interestingly, salmon, which was the main ingredient in my dog’s original kibble, was marked gray, which meant (according to 5Strands) that he could tolerate it without a problem.

The report also flagged some grain intolerances: white rice was a no-go, but brown rice and wheat were just fine.

So, with the 5Stands results on hand, I researched dog foods. Finding a kibble that didn’t have chicken or chicken meal as the first few ingredients was not easy, but eventually, I zeroed in on a dry dog food formula that worked for my dog’s allergies: Purina Pro Plan Sensitive Skin & Stomach, Salmon and Rice formula.

So Does the 5Strands Test Really Work?

It’s been a year since I started feeding my dog the new Purina food, and he hasn’t had a single ear infection.

So it turns out that the 5Strands test helped me figure out my dog’s recurring food allergy/itching/ear infection problem, and I didn’t have to shell out almost a thousand dollars for a blood test. That said, there’s currently no scientific evidence to support why it worked—and if my dog’s allergy problems were more serious or not solvable by switching foods, I wouldn’t hesitate to seek out a dog allergy test at my vet’s office.

Dr. Greenstein remains skeptical. “Chicken is one of the most common dog allergies. It’s not that there’s anything wrong with chicken—but a lot of dogs can be allergic to it. If I printed reports that said, ‘You’re allergic to chicken,’ I’d do pretty well.”

Perhaps the real advantage of the 5Strands test is that it encourages pet parents to follow a systematic process for allergy testing—a six to eight week elimination period of popular allergens.

Dr. Greenstein is sympathetic. “These cases can be frustrating, and there’s no one quick fix, because the issue is complex. Just because you don’t want to pursue expensive testing doesn’t mean your vet doesn’t have time to go over it with you. Your vet is a great resource to help you work through a list of allergens in a way that’s systematic.”

“I want pet parents to know they’re not alone,” Dr. Greenstein concludes. With pet allergies on the rise, that’s truer every year.

However you decide to conduct your test, the best tool in your arsenal is patience. 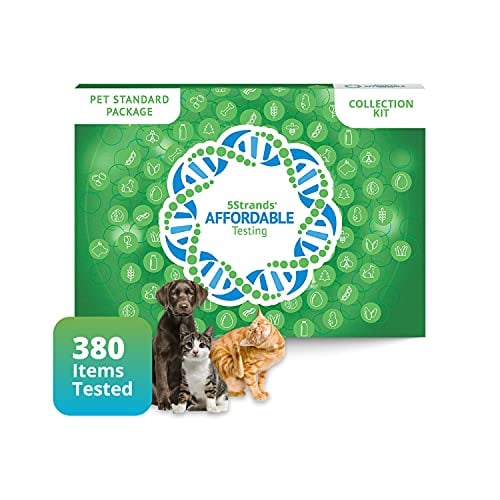 This relatively affordable test claims to help identify your pet’s intolerances to common pet food ingredients and other things in their environment by analyzing a hair sample.

Find on Amazon
Find on Chewy