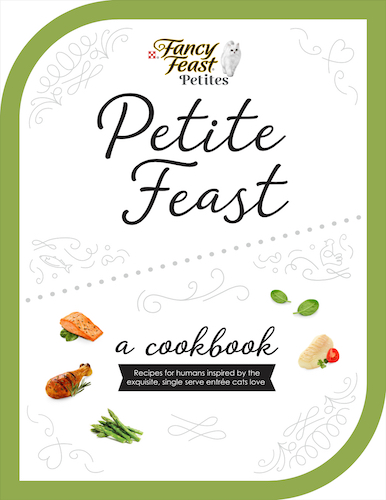 Our cats adore Fancy Feast cat food. Like all feline Fancy Feast aficionados, they have particular flavors and textures they insist on—for our kitties it’s the salmon paté and the beef paté.

Recently, a new line of Fancy Feast made it onto their “most wanted” list—Fancy Feast Petites, a small package of two single-serve, ready to eat wet food meals for cats. These recipes—with ingredients such as “wild Alaskan salmon” and “braised chicken”—sound remarkably like something you might eat yourself. So, (naturally?) when Fancy Feast rolled out this new product, the cat food company also issued a free cookbook PDF for humans: Petite Feast: A Cookbook, inspired by the new formulas and described as “recipes for humans inspired by the exquisite, single-serve entrée cats love.”

But are these recipes mere flights of fancy, or truly feast-worthy? I decided to make one and share a meal with our gray tabby, Zoe, to find out.

While the concept of cat food-inspired recipes for humans sound less-than-appetizing, the idea was brought to life with some notable names in the food world. These include cookbook author and 2019 James Beard award-nominated food blogger Jerrelle Guy, who runs the website, Chocolate for Basil. Her adorable, crosseyed, chonky tabby, Christopher, often serves as the taste-tester when she’s cooking.

Baker Josh Snyder (better known as Eli on Days of Our Lives), who with wife Angela Kinsey (the famous cat lady on “The Office”) run the baking website Baking With Josh and Ange, developed recipes, too. The couple has two cats, Oreo and Snickers, who are also apparently crazy about Fancy Feast.

The Petite Feast cookbook has 12 recipes: five featuring chicken, five featuring salmon, and two featuring whitefish. Not all of them map directly onto a cat food recipe, but some of them are closer than others.

Read on for our review.

It’s good that my cats really like Fancy Feast Petites cat food, because, wow, is it ever a pain to open the packaging. It comes in a two-pack pair of plastic containers that are joined by a foil cover that snaps apart to separate two, tiny 1.4-ounce servings. Once the servings are separated, it’s a struggle to peel back the stiff foil cover to get the food out of the container. (Confession: I usually give up and use a sharp knife to carve a large opening in the foil through which I scoop out the cat food.)

In defense of the strange packaging: These small portions are wonderful if you have just one cat and you are tired of having a fridge full of half-filled cans of cold cat food. Purina gets top marks for giving us these tiny portions of deliciousness. But as someone with quite a few cats, trying to pry back those foil covers on multiple tiny containers while hungry cats circle my ankles…Let’s just say that I’m clearly not the target audience for these mini meals.

Once you get it in the dish, the grilled chicken cat food looks appetizing and exactly like what it is: chopped-up chicken in a chicken broth gravy, with rice. (The other ingredients include liver, rice, other proteins, minerals, vitamins, and taurine.)

I appreciated that it doesn’t have the strong smell often associated with cat food. This lack of odor did not seem to discourage Zoe. She dove right in and I had to move really fast with the camera before her lunch vanished. Zoe did not wait for me to sit down with my dish to join her. Cats have no table manners. 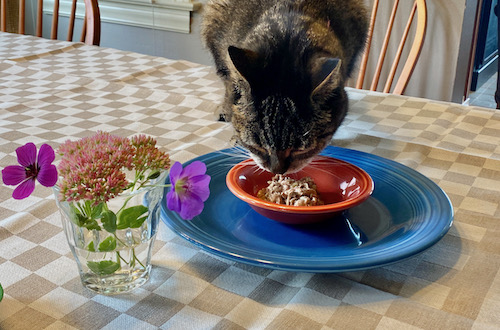 Preparing this chicken and rice dish was not as easy as opening a container, and certainly not as quick.

To start, of course, my chicken was raw and I had to marinate it for two hours in a yummy marinade of honey, oil, sriracha, salt, and pepper.

The rice also had to be cooked and then stored in the refrigerator (cold rice makes the best fried rice—and I spread mine out on a tray, uncovered, to dry it out a bit while it chilled).

Two hours later, with the chicken marinated and the rice chilled, I was ready to cook. First the fried rice. Surprisingly, the recipe said to cook the scrambled egg by itself and set it aside before sautéing aromatics (garlic, ginger, green onion) and adding the rice (with peas, sriracha, salt, and pepper to crisp). You dump the cooked egg, along with soy sauce and a bit of sesame oil, in at the end.

Once the rice was covered and set aside, I tossed the marinated chicken on the grill, 5 or 6 minutes to a side. Sliced and arrayed on the rice, here you have it: 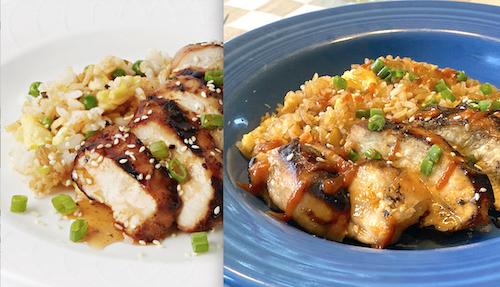 Which one’s mine? Hint: I garnished mine with extra sriracha.

Of course, by the time I sat down to eat, Zoe, and her meal of chicken and rice, were long gone.

But my lunch was good enough that I’ve since prepared the dish for guests (who were more than surprised to learn they were eating Fancy Feast).