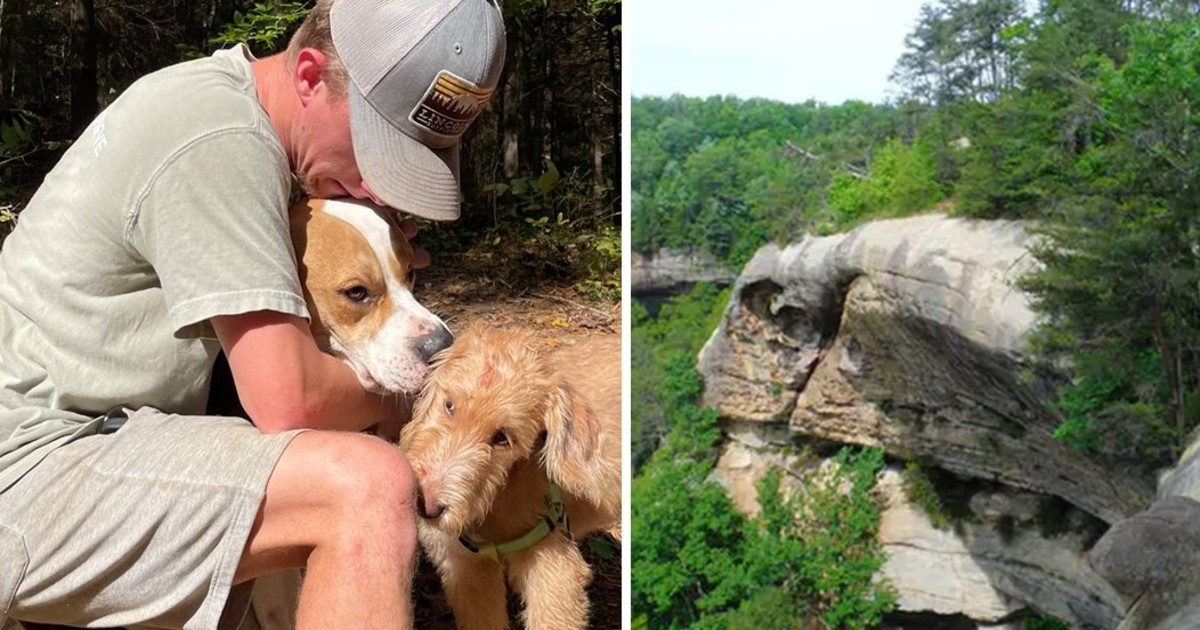 Locals are calling a Pit Bull/Boxer mix named Tyson a “doggone miracle.” He proved himself indestructible when he survived a situation that should have been fatal. The pup fell 170 feet into the Red River Gorge in Kentucky. While his human feared the worst, Tyson surprised everyone in the end.

Somehow, Tyson left the gorge virtually unscathed, and it’s hard to comprehend how. The only explanation is that Tyson is a miracle, and he will do anything to stay by his human’s side. Situations like this remind us to give our dogs endless amounts of love and affection while we can.

From Hiking Trip to Horror Story

Tyler Stinson brought Tyson on a hiking trip in the Daniel Boone National Forest. Tyson is no stranger to hiking, but everyone can get carried away at times. Stinson took Tyson off-leash for a bit, but when the dog saw a lizard, he bolted.

The lizard scurried down the Indian Staircase of the Red River Gorge, but Tyson couldn’t stop himself in time. He slid past the lizard and off the edge of the cliff. Stinson watched helplessly and feared the worst.

“He kind of flipped himself backward, tumbled twice, and then I saw him roll off the edge,” said Stinson.

Stinson wasn’t sure what to do, so he called 911 and the Wolfe County Search and Rescue Team. Rescuers arrived at the scene and looked everywhere for the pup, but they only expected to find a body. Then, they came across a group of hikers who said they spotted an unleashed dog, and they even had a picture. Stinson couldn’t believe his eyes!

As soon as the rescue team learned that Tyson survived, they searched harder for the dog. After splitting up, they quickly located the lost pup, who seemed fine despite his nasty fall.

“Adrenaline was running through my body, and the only thing I could think about was, ‘Holy crap, he’s alive,’” Stinson said. “The minute I saw him, I just folded onto him. That dog is my everything.”

Stinson rushed Tyson to the vet and was even more shocked with the results. The pup had a few small scratches but was otherwise unscathed. He had no damage internally.

“How Tyson survived 170′ fall is nothing short of miraculous and he was basically unhurt,” wrote Wolfe County Search and Rescue.

Everyone is trying to wrap their heads around how a dog survived such a massive drop. But when it comes down to it, the exact reasoning doesn’t matter. What’s most important is that Tyson is still alive and well despite it all.