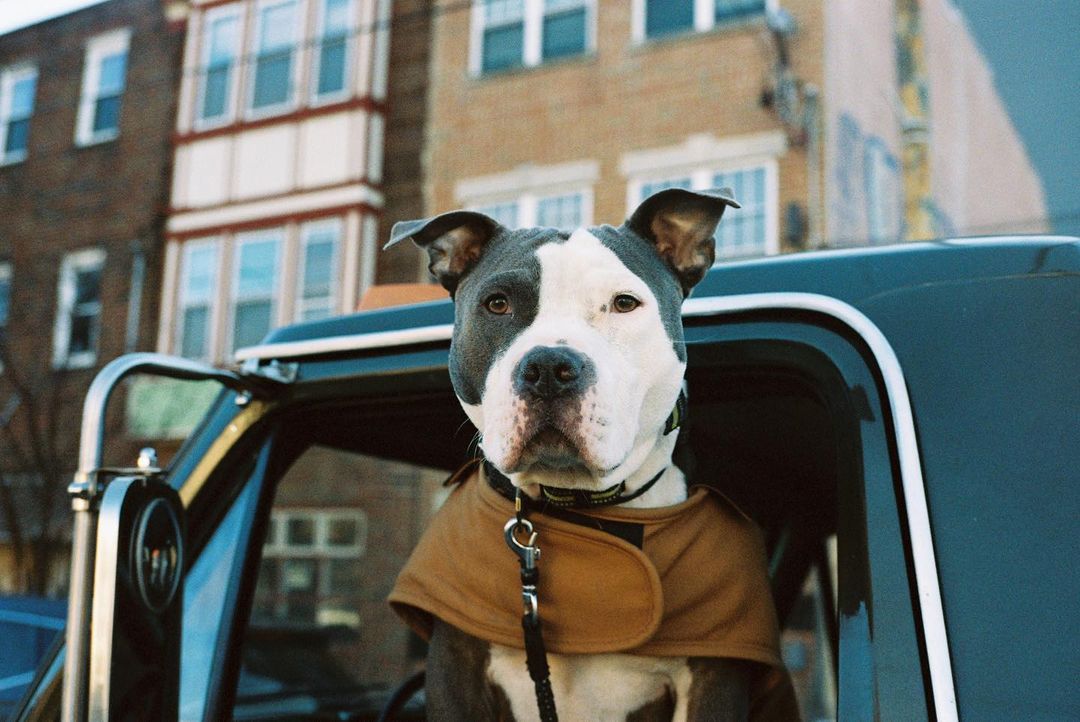 Maxwell Barna knew two things for certain: He didn’t want to turn his passion into a business, and he would do anything he had to for Willie.

But when Barna’s Pit Bull Willie (full name Shotgun Willie, named for Barna’s favorite Willie Nelson song), got hurt in a fluke accident that would lead to an expensive veterinary bill, Barna wasn’t sure what he would do. The surgery would need to happen soon, but he didn’t have the funds at hand.

Barna makes his living as a journalist in Philadelphia, but his hobby is film photography—that old fashioned art of using analog film to capture images. While his photography would occasionally accompany his written pieces, he never sold his photos commercially, because he didn’t want to commodify something that had added meaning to his life. Now, he saw it as the only way he’d be able to help his best friend.

Willie Comes Into the Picture

Just under two years ago, Barna got a call from a buddy who worked with a rescue group in Buffalo. The friend explained that they’d gotten word there was a Pit Bull on the west side of Philadelphia who was going to be euthanized if he wasn’t picked up immediately and asked if Barna could help. Soon, Barna had a severely underweight, miserable-looking dog with a terrible case of kennel cough in his custody.

Willie’s time with Barna was supposed to be temporary—Barna wasn’t allowed to have dogs where he was staying. He’d agreed to foster Willie until he got healthy and could see a veterinarian about getting the shots and neutering required by the rescue group to adopt him out. But, because of the pandemic, it took several months before Willie could see a vet. By the time he was ready to go, he and Barna had developed an inseparable bond. Barna decided that he couldn’t give him up.

“Sure, he had trauma and baggage, but what adult human being doesn’t?” Barna said. “He’s the most affectionate dog I’ve ever had. Everybody notices it. I have people who stop me in the park all the time and say he looks so happy. He’s my best friend.”

The animal shelter where Barna picked up Willie estimated that the pup was a little over five years old, though Barna figured he was younger, based on Willie’s high energy. Willie has thick muscles, but is surprisingly agile; an expert stick chaser.

A few months ago, Barna took Willie to their favorite park to tire him out before dropping him off at grandma’s house to stay while Barna moved apartments. It was an exercise they’d done thousands of times without incident. But on the last toss, Willie stopped well short of where the stick landed and started licking his leg.

“He limped over and I checked to see if there was something in his paw, but there was nothing there,” Barna said. “But by the time we got to the car he couldn’t put weight on it. We went immediately to our vet and they said he snapped his CCL [Cranial Cruciate Ligament] like a rubber band.”

CCL tears (similar to ACL tears in humans) are known to affect many breeds, but the injuries usually manifest in older or overweight dogs. “That’s not Willie,” Barna said. “You’d think my dog spends all day doing push-ups.”

Given how young and energetic Willie is, Barna said it was important to him that Willie saw a specialist in this type of repair. “I don’t want to short change him,” he said. In total, the surgery and related costs amounted to just under $6,000.

Photography for Barna has long been a cathartic practice—it was what he turned to after the passing of his father to process his grief. He used his Instagram to share how he was dealing with raw emotions and personal trauma. The realness and transparency in his posts soon drew a following. Today his account has more than 14,700 followers.

From the start, his fans started asking him when he was going to sell his prints. But Barna resisted.

“I’m happy people enjoy my work, but I don’t want to get to the point that I’m looking through my viewfinder and think ‘yeah, someone is going to buy this,’” Barna said. “I want photography to be something I continue to like doing.”

But with Willie’s costly surgery looming, Barna had to raise cash—and fast—so he made a compromise with himself. He’d allow for sales of select prints, but for just long enough until he’d raised enough money to cover the cost of surgery, as well as that of producing and shipping the prints.

“I’ve been adamant about not wanting to turn [my photography] into a business,” Barna said. “I don’t want to make money off of this.”

Barna spent days paring down tens of thousands of Dropbox photos (and enlisted a friend who helped choose the ones that would print well) and ended with 21 prints. Because they’re film, they appear exactly how Barna saw them—there’s no editing. Some of the shots include a pair of dogs playing on a beach at sunset, a neon-lit downtown street, and a long, lonely stretch of highway, among others.

Once he’d landed on the photos, he posted Willie’s story and the available shots on his Instagram and went to bed. Overnight, his community showed up.

By morning he’d raised more than $1000. And by the time of Willie’s surgery three weeks later, he had make just enough to cover everything.

Willie has now been on the mend for a month. Barna said because Willie is so high energy, it’s been stressful keeping him still, but it’s exciting to see him start to feel better.

Now a future full of apartment zoomies and truck rides is all but certain. For that, Barna is grateful.

“One of the things most surprising to me is that he’s a Pit Bull named Shotgun Willie—I certainly don’t paint him as a perfect angel—but people still want to help and support,” Barna said. “I’m so happy and proud that people are showing so much love to a dog that has come to mean everything to me.”

You can keep up with Barna’s photography and Willie’s progress on Instagram at @maxwelldbarna.