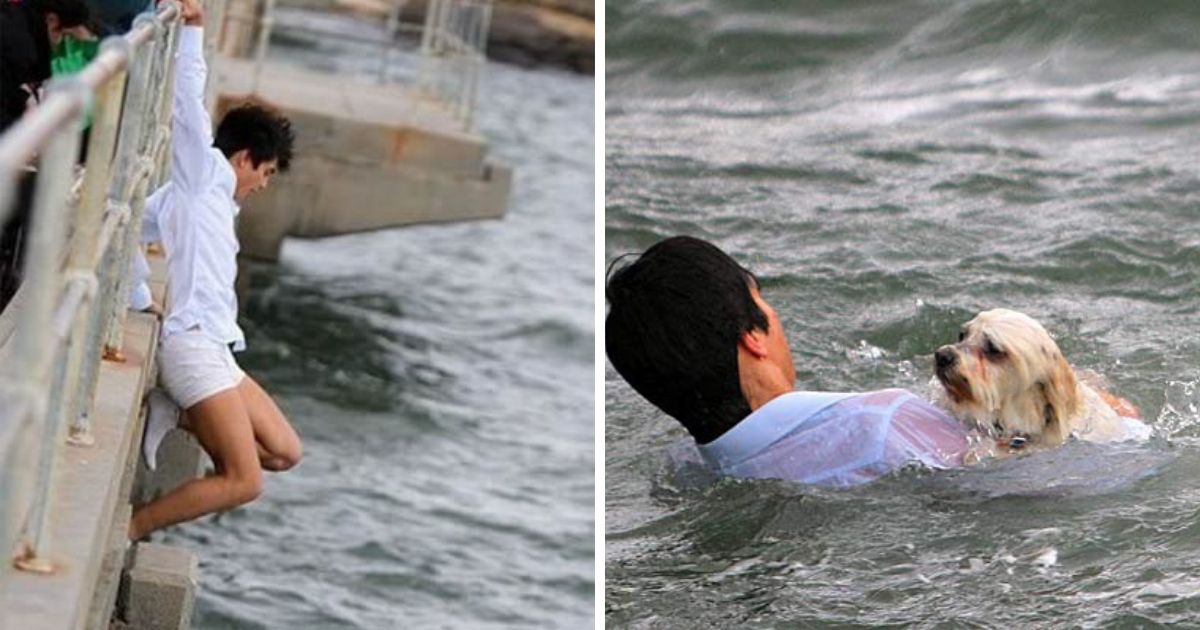 A grieving grandson named Raden Soemawinata went to the Brighton Pier to scatter his late grandmother’s ashes. He planned to spend the afternoon honoring his loved one, but was instead offered an opportunity to save a treasured life.

Raden set off to the pier in Melbourne, Australia to say goodbye to his dear grandmother. Just before he was about to head home after paying his respects, he witnessed a frantic dog owner in need of help. A tiny Maltese mix named Bibi was thrown off the pier by strong winds, tossing him into the unforgiving waters below.

Bibi’s fur mom, Sue Drummond, was in an absolute panic from the moment Bibi was pulled from the pier. Unsure if she could make the complicated rescue on her own, she turned to the bystanders around her in search of help. Thankfully for Bibi, Raden was willing to take the plunge.

Raden immediately began to remove his clothing and climb over the pier barriers. He spent a few moments hugging the rails before making the steep jump, likely experiencing a bit of fear in the moments leading up to the impressive rescue.

By the time Raden hit the water, Bibi was already struggling to stay above the surface. The Maltese mix was seen padding with all his might, struggling to conquer the waves that were throwing him around the bay. It took a few moments for Raden to reach the desperate pup, but Bibi was soon within reach. Raden quickly scooped up the terrified pup and held him above the waves, contemplating the best way to escape the rough water.

Raden quickly determined that he could not make it to the shore with the pup in hand, so he swam back to the pier from which they both entered the water. Raden hoisted Bibi up as high as he could, relying on Susan to lean over the rails and pull her dog to safety.

It was a challenge for everyone involved, but their impressive teamwork allowed Susan to grab Bibi by the scruff and pull him back onto high ground. Within just a few moments of Raden entering the water, Bibi was safe and sound!

Bibi was understandably shaken up from the event, but was otherwise fine once he made it back into Susan’s arms. Susan was blown away by Raden’s selfless bravery, fully aware of the fact that Bibi may not have survived without him.

It is mind-blowing that Raden happened to be at the pier at the exact moment that Bibi needed him. We are so thankful for Raden’s fast action to save Bibi’s life, and whichever forces brought him to Bibi’s aid in such a desperate moment.