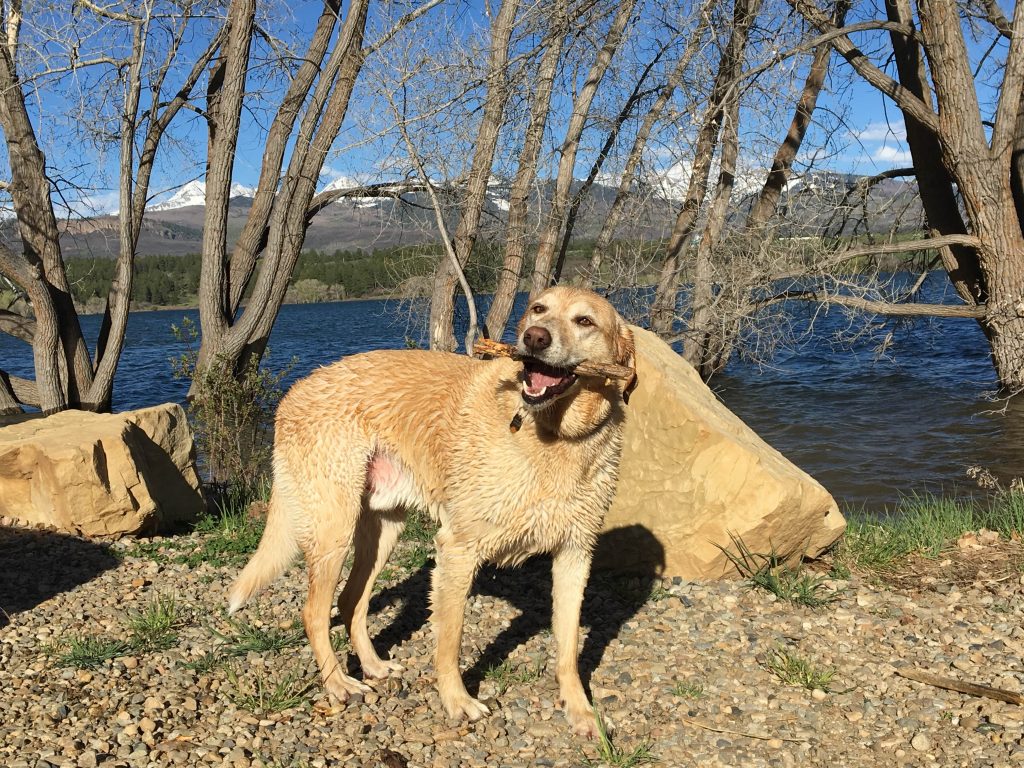 There’s no question that most dogs love to play. But do they also love to play jokes on us?

The answer is often yes, according to Stanley Coren, Ph.D, DSc., FRSC, professor emeritus in the department of psychology at the University of British Columbia and author of numerous books, including “How Dogs Think: What the World Looks Like to Them and Why They Act the Way They Do.”

He recently told Australia’s ABC Radio Adelaide that dogs can have a sense of humor—one that often manifests in playing practical jokes. He noted the classic example—a dog playing keep away with a toy—was noted by “none other than” Charles Darwin in 1872.

In “The Descent of Man,” Darwin observed:

Dogs shew what may be fairly called a sense of humour, as distinct from mere play; if a bit of stick or other such object be thrown to one, he will often carry it away for a short distance; and then squatting down with it on the ground close before him, will wait until his master comes quite close to take it away. The dog will then seize it and rush away in triumph, repeating the same manoeuvre, and evidently enjoying the practical joke.

More recently, analysis in May of 2021 by researchers at the University of California, Los Angeles found at least 65 species of animals—including dogs—essentially laugh through “vocal play signals.”

So our dogs can make jokes and also laugh at them. Of course, dogs are individuals, so just as some people don’t have a sense of humor (or have different ideas of what is funny), dogs may or may not be pranksters.

One common way dogs play jokes on us is offering a stick or toy, then stealing it and running away at the last minute. Photo by Jen Reeder

When asked if their dogs ever play jokes or display a sense of humor, dog lovers shared anecdotes with The Dog People:

“Tucker, our Aussie, picks up whatever you last touched. Remote control, water bottle, shoe, doesn’t matter. Then he literally spins in circles and figure eights so that you cannot get that item back. The whole time, he’s going four hundred miles per hour.” – Stacey K.

“Hawkeye loves to goose you. Right in the butt, usually while you’re doing dishes or something, and I swear he’s laughing when you turn around.” – Zach H.

“I used to walk my black Lab/Border Collie mix Ellie in the cemetery that was way up a steep hill behind my house. When there was a really bad snowstorm, she loved to just stop in her tracks and lie belly down in the snow. I’d say, ‘Ellie, come on,’ and she wouldn’t budge. I would keep asking her, and then I’d start laughing—it was hilarious—wind howling, snow deep, and she would refuse to walk all the more because she saw it was making me laugh. A smile would come across her face.” – Larry L. 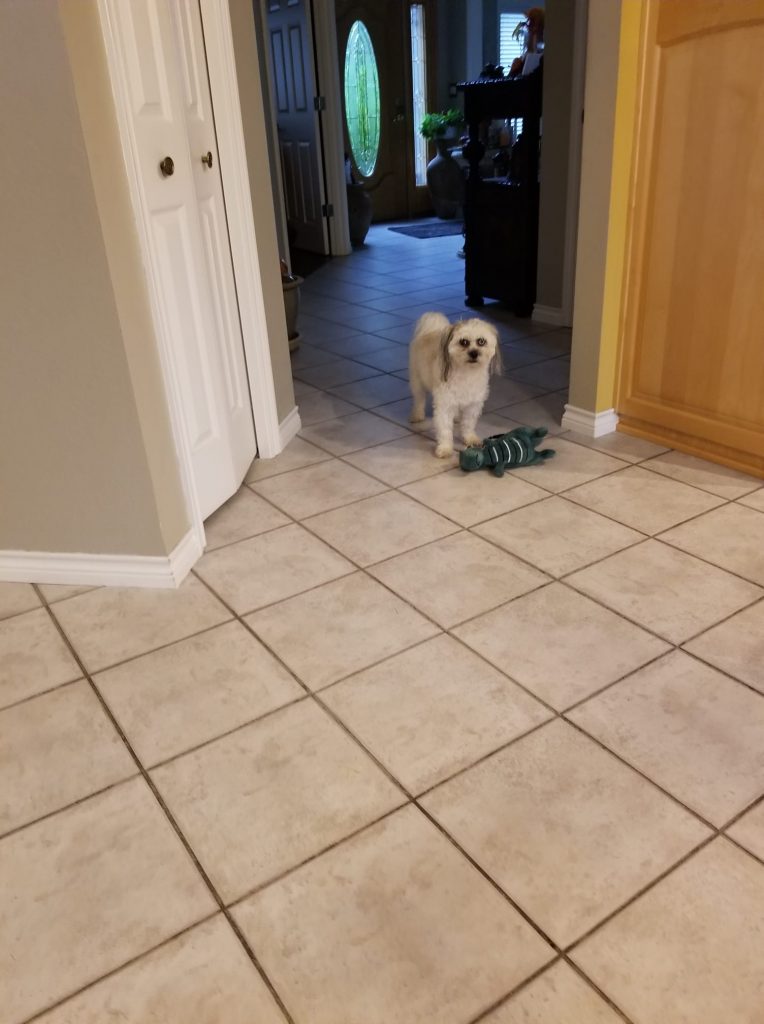 “Our Toby (Shih Tuz/Poodle) will bring his toy to our feet, growls, wanting us to pick it up but always beats us to it. Runs with it then waits for us to come and get it from him, and the fun begins, running back and forth with us trying to chase him. We finally give in and he wins.” – Bea S.

“I call Willow a little comedian. She does her army crawls and will look at you to see that you are watching (because it always makes people laugh). She also gets on her back and rubs around, which I call her break dancing moves. When she is doing any of these things that make people laugh she clearly has a smile on her face. She can be very expressive and I consider her facial expressions when trying to figure out if she is just playing or trying to entertain me.” – Sarah B.

“Donut does have a sense of humor but as I think about it, I wonder if it’s humor or play. When Donut comes in from a walk with Rich he races to find me—it’s a daily game. Usually I’m at my desk, but I like to throw him off and hide. He seems to love this and is doubly excited when he finds me. Still…how can you play and NOT have a sense of humor?” – Christine M.

Human beings often use empathy to try to understand others, so we tend to appreciate qualities we share with animals, says naturalist Sy Montgomery, author of numerous books, including “Tame and Untamed: Close Encounters of the Animal Kind” and “How to Be a Good Creature: A Memoir in 13 Animals.”

“Sometimes what a dog may think is hilarious, you may not think is hilarious, but you can appreciate that they think it’s hilarious,” Montgomery told The Dog People. “I think there’s so many interesting aspects to humor, and some of it involves knowing the butt of the joke, or what the other person sharing a humorous moment is feeling. And that’s a pretty sophisticated psychological ability to think of the other mind, and knowing that if I steal your sock and run away with it, you’re going to want that sock back.” 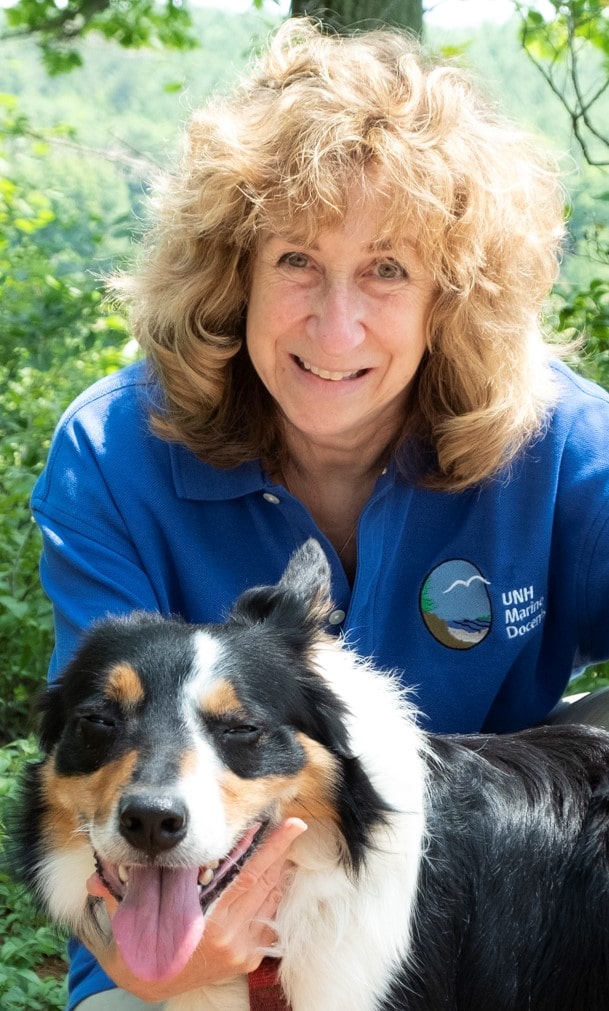 Sy Montgomery with her other Border Collie, Thurber. Photo by Michael Sterling

Montgomery’s Border Collie, Sally, even used to love playing a joke on her husband whenever he got up to use the restroom in the middle of the night.

“Sally would jump up and sit on his side of the bed,” she told The Dog People. “And when he would come back to bed, she’d be sitting there, not lying down, but sitting there with a big puffy smile. She thought that was the most hilarious joke anyone had ever played on anyone.”

Montgomery cited other examples of humor in animals she has observed, including emus who used to play tricks on a park ranger’s dog, and an octopus named Octavia at the New England Aquarium who stole a bucket of fish and hid it from researchers while they were distracted.

“She wasn’t even eating the fish in the bucket,” she said. “She, I think, thought that was absolutely hilarious. Octopuses do stuff like playing a trick on somebody like the dogs do. They will squirt people in the face with freezing cold salt water.”

Still, why does any of this matter—why is it important for us to know dogs, and other animals, may have a sense of humor?

Having insight into the inner lives of dogs and animals helps humans, the dog lover and naturalist says, to “respect them and love them more.”

Bioethicist Jessica Pierce, Ph.D, author of many books, including the upcoming “A Dog’s World: Imagining the Lives of Dogs in a World without Humans” (with co-author Mark Bekoff), hopes people will observe their dogs to see if they’re trying to be funny—and to find fun ways to play with them. 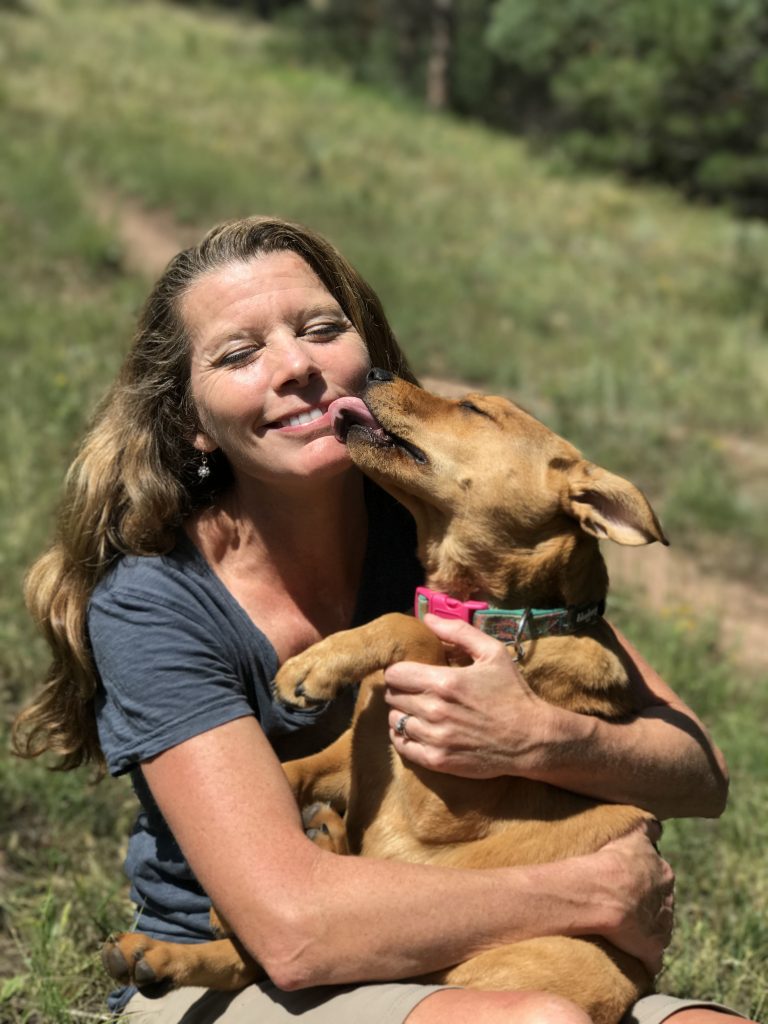 She invents games for her Border Collie mix, Bella, who loves games that involve things like toys disappearing. While Bella is in a sit/stay, Pierce will hide her toy in funny places, and Bella gets so excited that she wants to play the game over and over again.

“If people are invited to play with their dogs more and find new, interesting games that they can engage with their dogs in, that’s wonderful,” she told The Dog People. “Maybe we can make our dogs laugh, too—just like they make us laugh.”