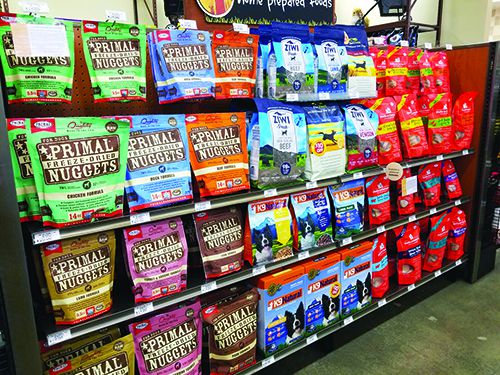 BENEFITS OF FREEZE-DRYING OR DEHYDRATING

The methods used to radically lower the moisture content of the foods reviewed here have the following advantages over baking or extruding the foods at high temperatures:

*These methods preserve the food (nearly stopping the biological activity that causes a food to decay) with less damage to the ingredients’ natural enzymes or vitamins than cooking temperatures cause.

*This means the meats and other ingredients are, by strict definition, raw. For those who believe in the benefits of raw diets, this is huge. (We’ll discuss those who consider raw foods to be dangerous in a minute.)

*When rehydrated, these foods are highly palatable to most dogs. It may be due to the concentration of flavor in freeze-dried food ingredients or their minimal processing. Dogs with poor appetites (like very senior or chronically ill dogs) may accept these foods when nothing else appeals.

*As a generalization, the makers of these products are targeting the top end of the market and have an extraordinary commitment to sourcing top-quality ingredients

DIFFERENCES BETWEEN FREEZE-DRYING AND OTHER DRYING METHODS

Freeze-dryers expose foods to low temperatures, freezing them relatively quickly, and then to high air pressure. When the pressure inside the freeze-drying chamber is high enough, small heating units are turned on, heating the trays that the food sits on, and causing the frozen water (a solid at that point) in the foods to transform into a gas (water vapor). Pumps pull the vapor out of the chamber while keeping the internal air pressure high.

Like freeze-drying, air-drying can be accomplished at low temperatures, but it takes longer and leaves meats and fats vulnerable to oxidation (spoilage); most foods are dried with temperatures of 140ºF to 180ºF. At these temperatures, the food is actually lightly cooked; the cellular structure (and thus the aroma and taste) of meats, fruits, and vegetables actually changes and the taste and appearance. In contrast, proper freeze-drying doesn’t affect the appearance or taste of foods as much.

The freeze-drying process sounds extreme, but the process actually leaves most foods less damaged than dehydration, which toughens meats and other ingredients.

The Food Safety Modernization Act (FSMA) of 2011 contains zero-tolerance policies for pet foods that test positive for pathogenic bacteria. For this reason, some of the manufacturers of freeze-dried raw foods subject their products to a “kill step” known as high-pressure processing (also known as high-pressure pasteurization, and in either case abbreviated as HPP); they don’t want to risk increased surveillance or recalls from food control officials.

The owners of some other companies, however, believe so strongly in the benefits of raw foods that they refuse to use a kill step. Instead, they rely on the quality of their ingredients and their own food “hazard analysis and critical control points”(HACCP) plans to prevent selling contaminated products. They understand that the FSMA policies are present to protect dogs and their owners, and that today’s human food supply does sometimes contain pathogens – but they also have observed that most healthy dogs can easily digest and benefit from raw foods – even raw foods that may contain some pathogens. (Few healthy dogs have trouble with Salmonella, for example, though Listeria and e. Coli are another story.) And, importantly, they engage and educate their consumers about these facts.

There are food-industry experts who feel strongly that HPP is a very safe technology, and others who worry that it may alter foods on a molecular level. We feel fine about HPP; we’ve been to HPP plants and observed the raw dog food before, during, and after treatment and have confidence that it is not harmed or made unsafe to feed. On the other hand, we respect the right of owners to feed raw foods that have not undergone a kill step – as long as they are informed about the risks to which they are subjecting themselves and their dogs.

Some of the companies utilize a “test and hold” program whereby finished products are tested for pathogens and not released for sale until results indicate the products are uncontaminated. Buying a product from companies that employ a test-and-hold program is a good way to ameliorate fears about a raw and unpasteurized diet.