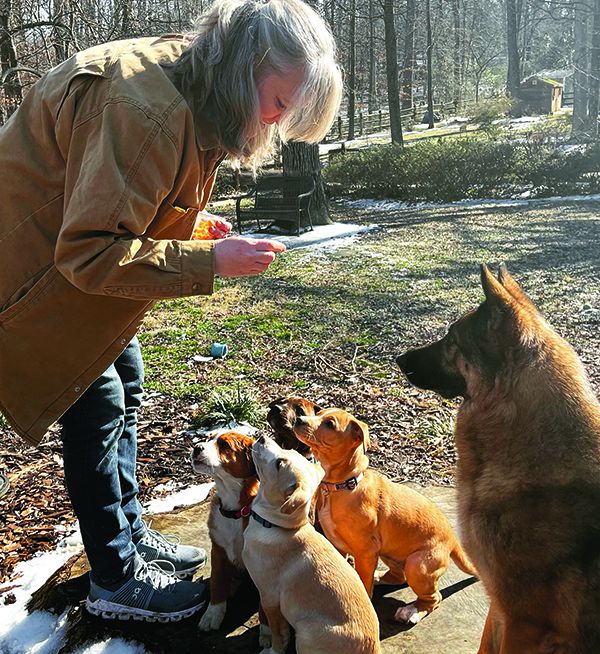 Take a moment to ponder a miracle: We can reach across the great species divide and convince a dog to do something utterly unnatural – like walking slowly at our side, with a weird thing around his neck. Even more amazing is the fact that we can make this moment feel great to the dog. How? By starting with the universal gateway: Food.

Food is a gift to cross-species communicators: It’s fast. It’s clear. It’s happy. Use food to tell your puppy, “Yes! That’s exactly what I mean!” and pretty soon your puppy ends up having all sorts of positive feelings about you, about training, and finally about that weird walking-by-your-side thing. You’re on your way to a very well-behaved dog who also happens to be a joyful best friend.

Folks will sometimes tell me they can’t use treat-based positive reinforcement to train because their puppy isn’t food motivated. I ask the human what they’ve tried so far. That’s when I get the blank stare. I prompt: “Fresh chicken? Cheddar cheese? Dried fish? Vienna sausages?”

“Oh, wait,” they say as the realization kicks in. “I can give them that stuff?”

Fantastic! We don’t have a training challenge. We’ve only just begun.

The key tool in a positive-reinforcement training arsenal is the reinforcer. You need to put thought and effort into it. You know that one brand of shelf-stable chicken treats that you’ve been buying at the pet store since Day One? That’s not going to do the trick when you’re out on a walk and your pup hears the siren song of another dog across the street!

To set yourself up for a lifetime of focus from your dog, you need to create a pattern of being the best game in town. It’s easy to earn that designation with a piece of kibble when you’re in the boring old family room asking for an easy sit. But as you progress to more difficult tasks and more distracting environments, you’ll have to work your way up what I think of as the “treat hierarchy ladder.”

Discovering your dog’s treat hierarchy will take a bit of investigation. (Your dog will be all in for this key step in the training journey!) The point is that all dogs are not the same, and some have strong preferences. I knew a dog who loved chicken, but couldn’t care less for turkey. Knowing exactly what makes your dog’s knees go weak with glee comes in very handy as you train. (Plus, it’s cute.)

Just to get you started, here’s what’s on my own pack’s ladder these days, roughly in order from lowest to highest:

A policy of using the lowest-rung item you can get away with allows you to bring out the big hurrah when you really want to make an impact. I save dried fish for when I call the dogs in from barking at the foxes who are just beyond our fence. They zoom back, even with those rude interlopers out there taunting them! But if I used dried fish for daily training, soon I would not have the dried-fish tool to combat the fox situation. Whatever’s top rung on your dog’s ladder should not be used for everyday training – and don’t expect the lowest rung to allow you to compete with, say, a running deer.

Mind you, form matters. You obviously don’t want to take a can of cat food with you on a walk, but it’s a perfect high-impact reward for a dog who’s being calm around the new kitty in the kitchen. When you know you’ll need a handful of reinforcers that are easy to deliver quickly and precisely in a challenging environment like a busy walk – i.e., not sticky, or falling apart – the store-bought treats can be best. Sometimes soft works better than crunchy, because needing to chew something can slow down the rhythm of your training. Bottom line: Be ready to put in some time experimenting and have a training bag with sections for different items.

Oh, you’re worried that using “human food” will teach pup to beg? Um, don’t tell pup it’s human food. If you feed pup a Milk Bone off your plate at the dinner table you’ll be teaching him to beg. Begging is situational.

NOVELTY MAY BE YOUR DOG’S FAVORITE FOOD

One of my clients reported that her dog was no longer interested in training. I asked what she was using as a reinforcer. “Fresh boiled chicken!” Hmm. That’s a good start. Then she said, “I always use that.” Ah-ha!

Just because it was the most incredible taste sensation last Friday does not mean it will have the same appeal next Tuesday. While some dogs do have always-and-forever favorites, others are more thrilled by novelty. If you sense a lack of interest, remember to keep changing things up.

But … Won’t It Mess Up Their Diet?

People worry that using food to train will interfere with a solid diet and cause the dreaded intestinal dismay. Of course that can happen if you aren’t careful, but normally it’s not an issue at all, for three reasons:

1. Use teeny tiny pieces! I mean miniscule. Basically a whiff, plus a bit that touches the tongue. We are not feeding our dogs here. We are creating a happy thought for them. Just a moment’s experience of that feta cheese – “Wait, what was that?” – is enough for a pup to be all in with training.

Pea-size is a good rule. So think about it: If you reward your dog two dozen times in a five-minute session, that’s about two tablespoons.

2. Watch the poop! Every now and then a dog will have an unwelcome response to a particular item. Just remove that treat from the ladder. In the meantime, use sweet potato bites and boiled chicken to train with – since that’s one of the things a vet will tell you to feed a dog with the runs.

3. Do the shuffle! If I’m doing a whole lot of training with one particular dog, I will use half of her normal kibble and half other yummies. The pup doesn’t know which treat she’ll get at any point in training but is willing to eagerly play the lottery because sometimes it’s her favorite. (When I do that, I do keep the super-duper special food separate in the pouch so that I can use it when I need to.)

ISN’T THIS JUST BRIBING THE DOG?

Sometimes – often right before they get addicted to positive training –owners question this emphasis on food. They feel like they’re bribing their dogs. They have a sense that their dog should just want to listen to them and obey. They ask about the old-fashioned methods where treats are not used.

You know what’s used in those methods? Fear. “If you don’t do what I ask, you’ll experience something bad.” Is it just me, or is that the approach that should be raising questions in an owner’s mind?

There is no in between. There’s no mind-meld training where you use neither a carrot nor a stick. No method where this member of another species automatically wants to do weird things like “shake” at exactly the time you want him to. It’s a carrot or a stick.

I have no qualms with using carrots, and plenty of them. Yes, I scale back to an intermittent reward schedule. My dogs generally do as I ask and half the time get only a kind word and a nice butt scratch as a reinforcer. But, gosh. Why wouldn’t I want to make it extra fun for them to spend time with me training? Why wouldn’t I be grateful for a little thing I can do to make us both enjoy training equally – my pups enjoying the treats, and me enjoying the progress?