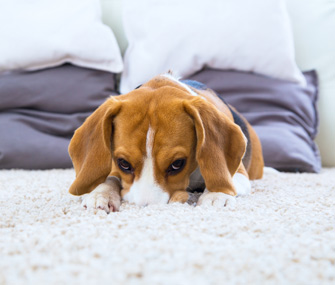 What is it about carpet that seems to incite some dogs to want to ‘dig to China’? Do you cringe when you hear the telltale scrape of canine toenails furiously trying to scratch their way through your floor fibers?

There may be simple explanations as to why some dogs may engage in this behavior. Sometimes it may be as simple as him scratching to dig up that single crumb of food that fell in between the carpet threads. Other times it may be an interesting smell that compels your dog to dig at a particular location before he rolls in it, much as he would do outside in the dirt. In this case, the digging may simply be an instinctive reaction to that scent. Other dogs will ‘dig’ in the carpet and turn a few times before lying down, which again may be the expression of an innate behavior dogs engage in to “fluff up” their bedding before lying down.

Certain dogs, however, may dig in the carpet when they are excited or anxious. This can be a displacement behavior, meaning that when your dog cannot perform a behavior he wants to do, he instead performs another. An example of this would be when a dog sees a squirrel sitting on a branch, he may bark and dig at the base of the tree. The squirrel is out of reach and the dog cannot chase it so he barks and digs instead! It might also be an expression of excitement or excess energy. When my Cocker Spaniel wants to play, he runs around the house barking at my Shepherd to try and get him to join in. Both dogs then chase each other around the house until my Cocker goes and digs in the carpet. I think he becomes overly excited and has to expend energy in another manner. Sometimes my Cocker may wrestle with my Shepherd, but every now and then he will just start digging inside. Finally, some dogs may also learn that when they dig in the carpet, they receive attention from their owner. Whether it’s a verbal reprimand or you calling him away using a toy, he learns that he will receive your attention.

What Can You Do?

If you’re worried your carpet won’t stand up to all the attention, you can try dissuading the digging behavior by making a slightly startling noise to get your dog’s attention and to interrupt him. Make sure the noise you use gets his attention but does not scare him. Once you have broken the cycle of behavior, then call your dog over to you and ask him to perform several cued behaviors such as sit, look and touch, treating and praising as necessary, to provide your dog with a more appropriate outlet for his energy. This can lead to taking him for a walk or providing him with a puzzle toy to occupy his attention. If crumbs or interesting scents seem to be a potential cause, try more frequent vacuuming or spot-cleaning of your carpet. If specific areas of your carpeting are being damaged, you can try strategic placement of sections of heavy mats or indoor/outdoor throw rugs to protect carpeting.