We all know that the standard greeting between dogs is the good ol’, slightly uncomfortable for humans, butt sniff. This tells dogs a lot about each other, including who’s friendly, who’s not, and even who might not be feeling so well. Though it’s not quite the same thing, cats also use their butts to communicate with us–perhaps the best known manner of which is the “elevator butt”. But what does it mean when cats raise their butts when scratched–or just for attention? And why do they do it?

Cats use body language as their primary means of communication–both with us and with other animals.

Tail: A cat’s tail is perhaps the most expressive part of its body. The motion and position of a cat’s tail can tell you many things including if they are scared, excited, relaxed, or annoyed.

Posture: Similar to its tail, a cat’s posture speaks as loud as words would if they could use them. A cat with an arched back and hair standing on end is probably ready to throw down whereas one crouched and appearing as small as possible is likely feeling scared or threatened.

Eyes: The eyes definitely are windows into the complex souls of cats. If a cat’s eyes are dilated and wide, there’s probably something really interesting to focus on, like a bird outside a window. Eyes that are squinted probably mean your cat is not happy. Then there’s the infamous kitty slow-blink–a very quiet way of yelling, “I love you!”

Ears: The position of a cat’s ears is also a prime indicator of what they’re thinking or how they’re feeling. A cat with ears moving furiously around, and independent of each other, is likely listening to something very interesting. A cat with its ears back flat against its head is likely very unhappy–and will probably also be emitting some spits or hisses.

Butts: And now, let’s get to the butt of it. Just like with dogs, a cats butt can tell other cats a lot about what’s going on. Cat greetings generally begin at the other end, the face and neck, where there are scent glands that can tell another cat a lot about who they’re greeting. If all goes well, a cat greeting will generally continue down the body, past the sides and ultimately, end with a raised tail, butt, and a sniff. If a kitty allows another to go in for a sniff it generally means they have been accepted (of course, as long as they stay on good behavior). 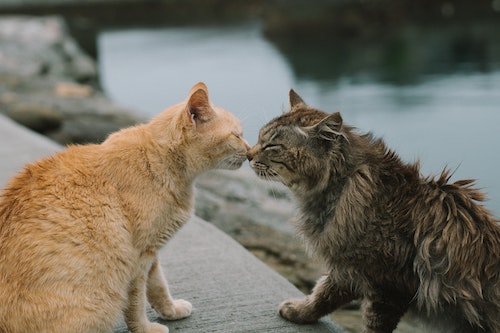 There are a couple of different kinds of butt-showing in cats: the presentation and the elevator butt.

Presentation is when you’re just sitting there minding your own business and a cat gets in your face and turns around to present…well, you know. Because cats will allow a little sniff from those they trust, the presentation of a butt in your face likely means, “Hello! I trust you”. It probably also means, “You need to pay me some attention. Stat”.

Elevator butt is what happens when you’re petting your kitty and they assume a chest lowered, hiney-raised position. This means you are pretty much a straight-up amazing kitty petter. Many cats like being petted in specific areas and for those who like scratches, brushing, and pets at the base of their back/tail this is just a sign that it feels great. If you have a kitty who does not like being petted on their rear-end, give up. Just like you don’t like it when someone sticks a finger in your mouth when you are yawning, some cats just abhor hind-end pets. Reasons why can range from it hurts to it’s annoying so…steer clear if that’s the direction you are getting.

Anyway, back to those kitties who like their rear ends scratched. Many experts believe this behavior, like others such as “making biscuits”, comes from interactions with kitty moms. Kittens are unable to pee or poo on their own until they are about 3-4 weeks old so it’s mom’s job to lick their little areas to get them to go. Many kittens will raise their little hineys to mom in order to help get the job done and, because it feels good to go, this feel-good behavior continues…just a tad bit differently.

When a cat “rear-end raise” can mean something else

The technical term for feline butt-up behavior is lordosis and when you see it in an unspayed female, it likely means she’s in heat. Often in this state lady cats will get super sweet and pop into this position with any attention at all–in this case, it may signify she loves you but it’s more likely to mean she’s ready for some loving from another cat. If your cat is unspayed and displaying such behavior, your best bet is to keep her inside and get her spayed as soon as you are able.

Another thing that can cause cats to assume the butt-raise is that, well, there’s something in/on there. This can range from a little stray nugget easily dislodged with a warm cloth to something more serious such as intestinal trouble. If you sense something might be off about the type of butt-raising your cat is doing, check with your Vet. It might be nothing but your kitty may have ingested something that’s making pooping uncomfortable, difficult, or impossible.

Leave it to cats to find a way to talk with their butts. Geniuses.

Enraged Man Heard Rumor About Puppy Living In Birdcage, Drove Over Fuming
Hero Dog Sniffs Out Injured Baby Girl Abandoned In Family’s Shed
Abused Dog Set To Be Put Down Tries To Bite The Hand That Wanted To Save Her
Homeless Man Looks After Puppy With Broken Leg Until Help Arrives
Young Boy Abandons His Beloved Dog With Favorite Toy And Heartbreaking Note