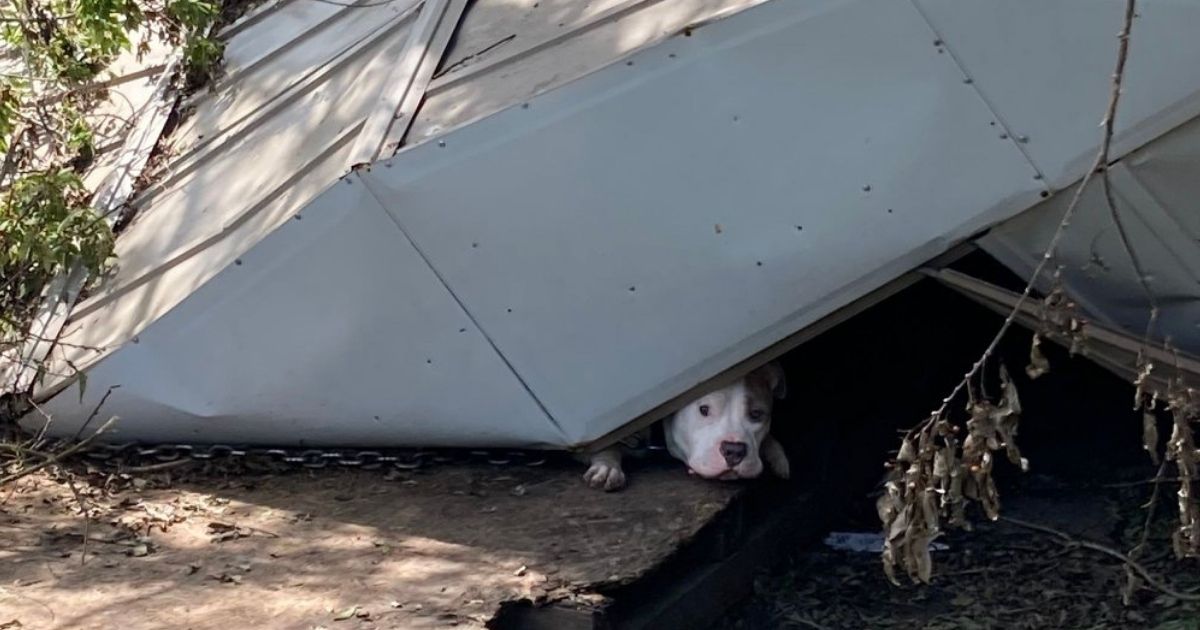 A Good Samaritan was assessing the damage from Hurricane Ida when he stumbled across a heartbreaking sight. Underneath a collapsed shed was a terrified Pit Bull named Bubbles, desperate to be freed from his traumatizing reality.

Hurricane Ida left devastating destruction in her path when it made landfall in Louisiana. 130 mph winds ripped through the area with a fury, damaging thousands of homes in the process.

It is impossible for most dog lovers to understand, but many undeserving animals are left behind in natural disasters to fend for themselves. Unfortunately for Bubbles, he was one of the unlucky pups that fell into this category.

Once the Good Samaritan locked eyes with Bubbles, he knew he had to get in contact with a team of skilled rescuers. Bubbles was not only trapped under a collapsed shed but he was also tethered to a chain. Freeing the terrified Pittie pup was not going to be an easy task.

The Humane Rescue Alliance arrived on the scene quickly, as they were already working to rescue other abandoned animals and bring them into the care of the LASPCA. Once the team arrived at the collapsed shed and assessed Bubble’s appearance, it was clear that she had been out there for days.

“We suspect the dog had been stuck there — terrified in the sweltering heat with no food or water — since the storm hit.” – LASPCA

The team immediately got to work on freeing the trapped Pit Bull, with some lifting the shed and others luring Bubbles out from under its grasp. Once Bubbles was finally out from under the rubble, they were able to release him from the chain.

“Once freed from the shed, Bubbles was super friendly and sweet and became almost immediately affectionate toward his rescuers.” – LASPCA

The team has no idea how Bubbles managed to survive the fury of Hurricane Ida. We can only assume that the shed offered him just enough protection to make it out alive, though nothing could protect him from the paralyzing fear he must have endured.

Bubbles is now in the care of the LASPCA and is finally receiving the support he needs. Now that he is finally safe and freed from his past, his adorable personality is beginning to shine through. The staff has fallen head over heels in love with this triumphant boy.

Bubbles is just one of the many furry friends that has been left behind in a natural disaster. We can’t imagine what these poor pups have gone through, but we hope they have all found the loving care they deserved from the start.