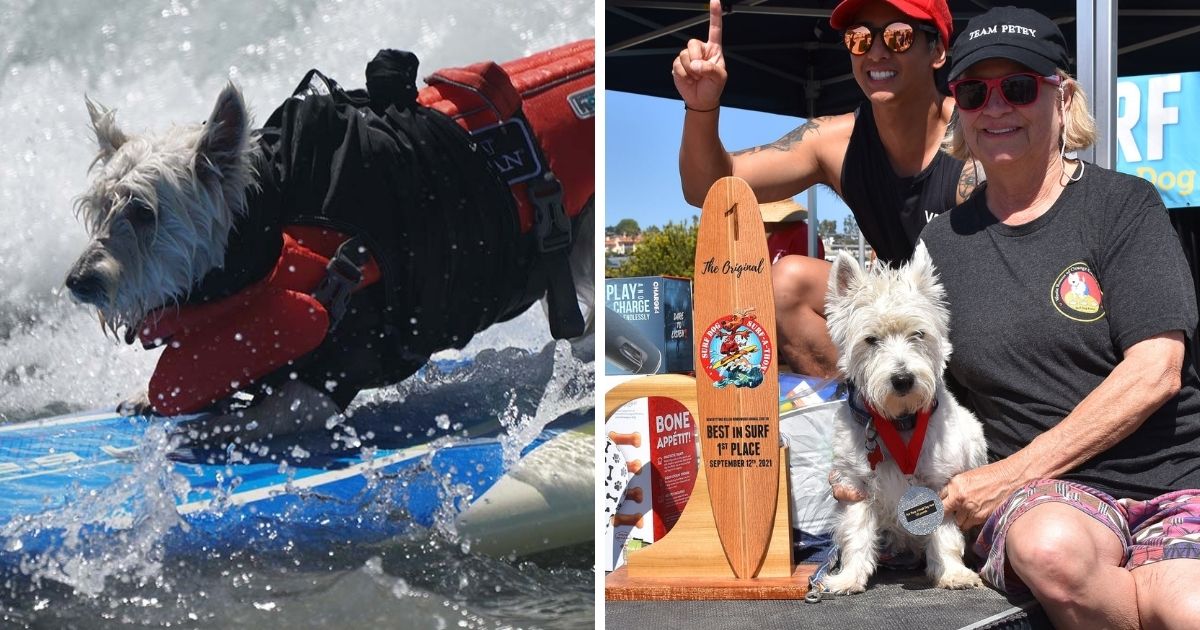 A Scotty named Petey took the crown in the 16th Annual Surf Dog Surf-A-Thon. Not only did this pup take home an impressive win, but he helped raise funds for the many programs at the Helen Woodward Animal Center (HWAC).

Each year the HWAC hosts a surfing competition on a dog-friendly beach in Del Mar, California. Fur parents and water-loving pups get to show off their surfing skills for a great cause. The competition helps support the shelter’s various missions, including pet adoption, skilled community outreach, and therapeutic horseback riding.

We all know how impressive our canine friends can be, but these surfing pups take it up a notch. Many of these dogs have been training alongside their owners for years, allowing them to ride every wave that crosses their path. While some hitch a ride on their owners’ surfboards, others ride the waves solo.

This year’s competition showcased a variety of dog breeds and their jaw-dropping skills. Petey may have scored first place on the beach, but his competitors brought the heat as well.

Some of the many pups to grace us with their talents included a Bulldog named Rothstein, a Goldendoodle named Derby, and a Terrier Mix named Carson. Among the crowd were a few adorable sights as well, as many of the pups rocked their best beach attire! The event even included a doggie costume contest for the pups that preferred to stay on the shore.

The Surf Dog Surf-A-Thon includes two different competitions. One for the pups who rode alongside their owners, and the other for the dogs that preferred to surf in packs. These pups received points based on their surfing creativity, but every furry friend had something unique to offer.

At the end of the day, Petey stole the show with his impressive technique and dedication to the sport. Petey has participated in the last few Surf-A-Thons but was yet to take home the title, so we are glad his hard work has finally paid off!

The Surf Dog Surf-A-Thon is such an incredible way to bond with our furry friends and support an important cause. But you don’t have to hop on a surfboard to support this organization’s work. You can make a donation on their website or follow their Facebook page here.

Congrats on the big win Petey!